Here is your 5G which will transform your revolutionary life to ultra-high broadcasting 5G frequencies. The Speed which is 200 times faster than your current 4G network.

There is no doubt that how each and every day companies are innovating new era of technology, the same is now with network provider companies, Samsung Electronics Inc developed a new way to consume 5G speed which will be 200 times faster than your 4G networks.

Samsung Electronics declared that they have developed 5G internet speed in a new way, using the ultra-high broadcast frequencies, the new 5G speed can also deliver to highly dense locations where the network volume is low, the speed of the new 5G speed from Samsung will be 200 Times faster.

Samsung in a NewsRoom: “By utilising ultra-high broadcast frequencies, 5G will deliver data transfer speeds that are up to 200 times faster than current 4G networks, even in highly dense locations.”

This technology not only will support Samsung Electronics getting more active users but also to those users who seeking high internet speed and some of the users doesn’t have wireless connections,

Here is what Samsung said in NewsRoom: “For a start, 5G will make it possible for users to enjoy rich 4K video and more immersive virtual and augmented reality experiences. Imagine being able to take in a front-row concert experience from the comfort of your living room, spark your child’s curiosity with immersive augmented reality edutainment, or simply conference with colleagues through crystal clear video. 5G technology makes it possible to seamlessly facilitate such data-heavy tasks while also opening the door for greater automation in more aspects of daily life, allowing us to streamline everything from the Internet of Things (IoT) and self-driving cars to robotics.”

Samsung Electronics working on 5G technology since 2011, Samsung high authorities have worked with different expertise around the world to gain sustainable technology which can bring the new tech era. Samsung stated: “By ushering in the 5G era, leading research to advance its commercialization and explore its applications in communications and IoT, Samsung is helping create the world where imagination can become a reality.” 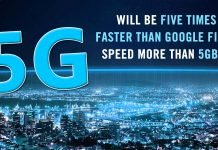 Here Is Your 5G! Intel Reveal The First 5G Modem