According to research firm IHS, which dissects each new iPhone to estimate its cost of manufacture, the latest release by Apple amounts to 160 US Dollar, for a sale price of 700 US Dollar.

The manufacturing cost of the iPhone, a well-kept secret. Every year, the firm IHS dissects the new Apple phone, piece by piece, and estimate the total bill. The figures are astonishing.

The Apple brand is paid. That’s the first rule in teaching husking new iPhones. When you add the price of all the components and assembly of the device, we arrive at a total cost of $165 for a device that is sold $766 in store.

It is not labor which swells the bill. The production in Chinese factories is just over $3 of the total. More margins on the iPhone 6 Plus: The margins are even more interesting on the iPhone 6, the XL size model. Sold $110 more expensive, it costs only $13 more to produce.

To these sums must still add marketing costs, always consistent from Apple. But clearly, at the time of the race at low cost, the Group continues to take a high-end positioning. A winning strategy since the first weekend, the group has sold 10 million devices.

Ironically, Apple’s competitors also benefit. The South Korean LG, for example, which makes the screen, the most expensive part of the iPhone, charged $36 each. Not to mention Samsung, which manufactures some of the processors. The heart of the iPhone fills the coffers of his worst enemy.

But that is actually worth your iPhone 6 at the exit of manufacturing lines?

The Teardown site conducted the survey on the price of components to get an estimate of the actual price of the hardware of the iPhone 6. 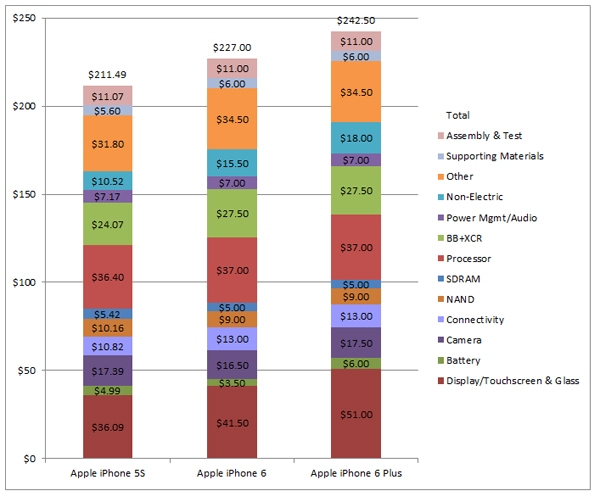 Approximately it cost $180 to make the iPhone 6. Going up the production chain, investigators have Teardown eg estimated the price of the screen of the iPhone 6 to $ 41.5, this screen is also the most expensive component on the smartphone of Cupertino. The second item of expenditure for the new A8 processor which costs $ 37.

Andre Rassweiler, senior director at IHS, said Apple had always been good at it, with “desirable features” to release new iPhone models and attach them a maximum profitable price tag.

What apple have been doing is pursuing a strategy in the past, to let customers pay for more storage. This plan follows the company on iPhone 6 next.