Apple’s new update is ahead, And the customers are eagerly waiting for it. But looks like last year the customers didn’t get the previous version of iOS on time. It was said that iOS 9 was released on September 21 and was installed over 50% of active iOS devices, This was measured by the App store. And look’s like Even this year not all Apple users will get to install the new update iOS 10. Because according to reports, There were thousands of iPhone 6’s screen stopped working due to a design flaw.

But anyhow, let’s start with the new update news. They announced iOS 10 release date as September 13th at Apples’s iPhone 7 Launch event. Tim cook unveiled iOS 10. He talked about changes in details. Changes from iPhone to iPads. According to reports iOS 10 is also under beta testing.

It is being said that this update of iOS will be completely different from the previous one. Some major changes have been done. So when you update it, you won’t be able to identify the interface as it is of some others OS. Below you can find the new features here about iOS 10 update.

1. iOS will be compatible with the following devices, Watch the picture below and find yours.

And Apple has confirmed that its upcoming operating system update will not be available for iPhone 4S, iPad 2 and iPod touch 5th gen

Since the launch of iPhone, We always expect at least one change in any software update i.e, Lock system. And finally, your wish just came true. Apple has changed the lock system from slide to unlock to “Press Home to open.”

Now the notification looks like they are shredded in the form of bubbles. And with this, you can clear all the notifications once. Also in addition to that, its time to use 3D Touch to show hidden menu actions. With the help of 3D Touch-enabled iOS 10, you can respond to messages at the very moment.

4. A new button to clear all notification 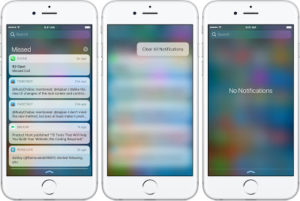 Finally, this feature is now available for the update. Now you can clear all the notifications at a time with just one tap. A new button to clear all notification is added.

It doesn’t matter if iPhone 7 is waterproof or not, Always try to keep away from water. And there is a new feature which detects water in the phone,