When talking about ASUS’ ROG series, we usually associate it with gaming computers. But as many smartphone makers have decided to take a new direction and launched a few gaming phones, ASUS has decided to try itself in this field as well. There are a couple of ASUS ROG gaming handsets, and a new one is on the way. Recently, a brand new ASUS smartphone has passed the Wi-Fi Alliance certification. Also, its running points appeared on GeekBench. If there is no accident, this new machine is the ASUS ROG Phone 3.

According to the GeekBench webpage information, the Asus ROG Phone 3 is equipped with a Qualcomm octa-core processor. On the GeekBench 5, it scored 902 points in single-core test and 2074 in multi-core. This is not likely to be the Snapdragon 865. 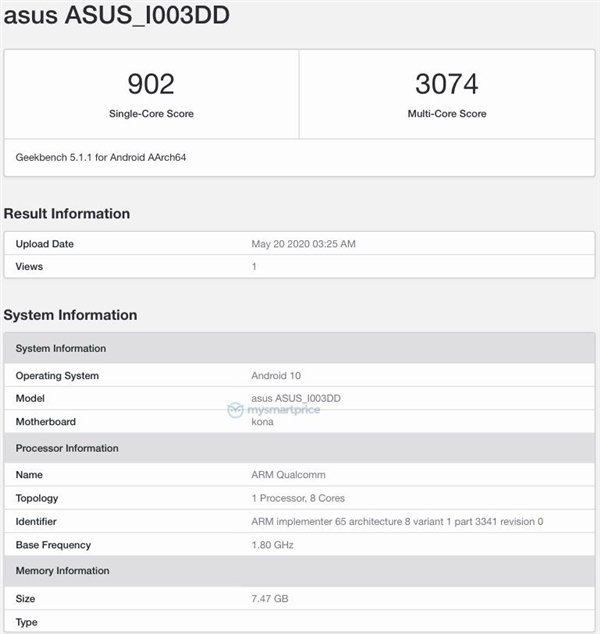 But this doesn’t mean the phone will use a weaker SND chip. Earlier, some news said that the Asus ROG Phone 3 will sport the Snapdragon 865 Plus processor. But who knows maybe ASUS has done a few optimizations and the upcoming handset will carry a regular SND865 under the hood. Anyway, the GeekBench document also shows an 8GB memory and the Android 10 system.

Previously, ASUS and Tencent have also cooperated on mobile games. As you guess, ASUS made a few optimizations for Tencent games. So the fluency will be better than other smartphones. The Asus ROG Phone 3 should also continue this advantage.