Currently, many smartphone makers are introducing their flagship models that should hit the market in the second half of this year. ASUS doesn’t want to lay behind. Its next ROG phone has already appeared on GeekBench. This simply means we have got some specs on the phone. Say, we learned that it will come with a 12GB RAM, Android 10, and Snapdragon 865. Today, the alleged ASUS ROG Phone 3 not only visited TENAA but also appeared on AnTuTu.

The Asus ROG Phone 3 will sport a 5,800mAh battery. It’s too large but expected. We mean the ROG 3 is going to be a new-gen gaming smartphone. Therefore, it requires more power. The battery should support 30W fast charging.

Apart from this, the handset will come with a 5.69-inch screen. Many expect it to be an OLED display with a 144Hz refresh rate. But at the moment, we can’t confirm this. We also think the triple-camera on the back will consist of a 64MP main camera and a 13MP secondary sensor. On the opposite, side we can find a 13MP selfie shooter.

As said at the beginning of the article, the ASUS ROG Phone 3 also appeared on AnTuTu. And we should say, it’s quite impressive. It scored 646,310. For reference, the highest AnTuTu score of a Snapdragon 865-powered device belongs to the OPPO Find X2 Pro, which scored 604,123. 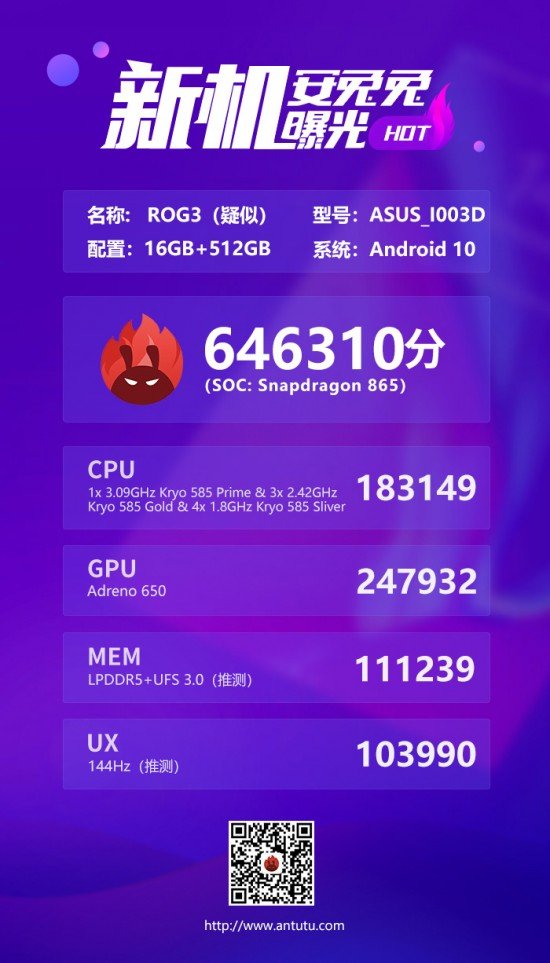 But there are several reasons to think about why it could outrun the OPPO model. First, we are dealing with the overclocked version of the Snapdragon 865. The chipset’s high-performance core clocked in at 3.09GHz, which normally runs at 2.84GHz. Second, its storage combination is 16GB + 512GB. And Third, We guess it comes with a 144Hz refresh rate display that is bumping the UX score up.

The ASUS ROG Phone is expected to be announced in July.