GaN chargers were one of the showstopper products at CES 2020. A couple of reputed charger manufacturers showcased their version of GaN products at the event and Aukey was one among them. Now, Aukey has officially launched its product, the OMNIA 100W PD Charger at a price tag of $54.99 (390 yuan).

The 100W GaN charger is available for purchase on Aukey’s official website. As mentioned above, it’s up for grab at 54.99 US dollars, about 390 yuan, which is a decent price compared to other chargers of the same specs. You can get the charger either in the black or white color variant.

Usually, the chargers made of Gallium Nitride (GaN) are anywhere from 11 to 57 percent smaller than non-GaN versions, depending on the wattage. As per Aukey, the new Omnia 100W PD is half the volume of the Apple MacBook Pro 16 96W stock charger.

GaN chargers are gaining popularity and replacing the traditional silicon-based chargers. Mainly because the GaN chargers don’t require as many components as silicon chargers. The material is able to conduct far higher voltages over time than silicon. And other goodies other than a slightly increased manufacturing cost compared to silicon counterparts.

Aukey Omnia has a USB-C interface making it compatible with all most all fast charging supported Apple and Android devices at full speed. However, it doesn’t support 45W fast charging for Samsung Galaxy Note 10+ since the charger is not of PD 3.0 standard.

The Omnia is powered by AUKEY OmniaChip™, which as per the company is the next-gen GaN IC developed by AUKEY, to bring a better charging experience. If interested, you can get one from the Aukey Official Website. 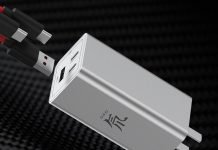