Once Again, Tencent does surprise, because the company decided to buy mobile games giant Supercell company. This is the developer company behind the hit games, storming the mobile app market as Clash of Clann, Hay Day, Boom Beach or the latest Clash Royale. Spend $8.6 billion, Tencent has officially become the owner Supercell.

With this deal, Tencent will hold 84% stake in Supercell and Supercell will be priced up to $10.2 billion. Despite the acquisition, but will remain active at the Supercell headquarters which is located in Helsinki. Only people who live in caves (like me) will not know how big Supercell is.

Let me share some information what we’ve found: they recently announced that 100 million people playing Supercell games every day. Well, you have not misheard, every day, 100 million players. The money they earn in lofty: they announce earnings reached $ 2.3 billion, while profits are $ 964 million. Clash of Clan alone earned $5 million, according to the mid-year report of Supercell.

In 2014, the company’s revenue reached $ 1.7 billion, with half a billion profit. Not bad compared to a company that was founded in 2010. It was with that momentum, to this day, the Supercell worth of $10 billion nor anything too strange. And when it was introduced directly into the China market, traffic to the game almost increased by 10% and which is a huge one.

Supercell is not the only one big-game company, Tencent acquisition, last year they also bought Riot biggest games, games with the huge amount of players per hour, League of Legends. Besides, the company also contributed capital to the big games like World of Warcraft or Gears of War.

It seems gradual, Tencent is looking forward to the whole array of mobile games are “making money”. Tencent, after buying shares from Softbank Supercell, will expand its operations in the gaming market. Currently, Chinese internet giants were on hand Riot Games, League of Legends manufacturers (League of Legends) – Computer games have the world’s highest revenue. Meanwhile, Clash of Clans Supercell is a mobile game with the world’s highest revenue. 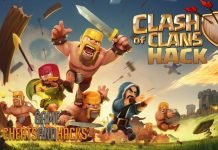 How To Get Unlimited Gems, Gold and Elixir In Clash Of Clan