Qualcomm and MediaTek are the most used processors in Android phones. Both brands have a vast range of processors that can be used in Android smartphones of every category. In this article, we will compare the Qualcomm Snapdragon 845 SoC and MediaTek G90T. Qualcomm announces the Snapdragon 845 in December 2017 and it was launched in February 2018. The main highlight of the Snapdragon 845 Soc is that it delivers up to 1.2 Gbps peak download speeds. Talking about MediaTek G90T was also launched in 2019 and mainly focus on Gaming. 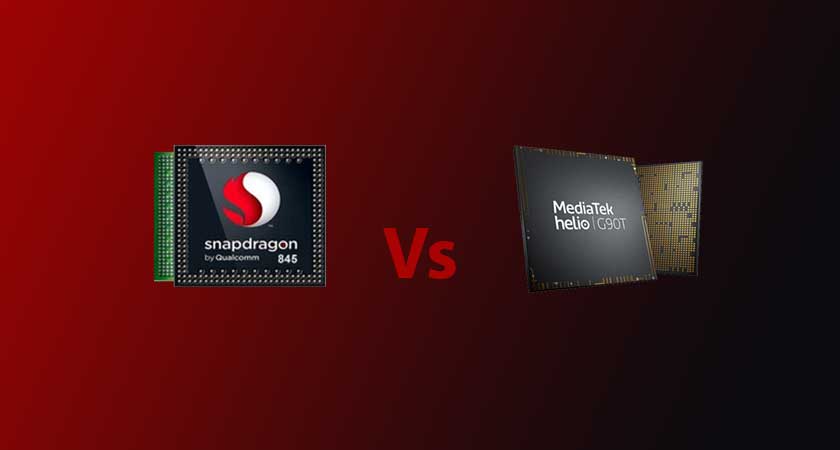 Must See: Comparison of MediaTek Helio G90T vs Snapdragon 675 (Difference)

As I already told you Snapdragon 845 was launched back in February 2018. It is 25% faster than predecessor Snapdragon 835 Soc. It has a third-generation AI mobile platform, adds support for Tensorflow Lite, and the new Open Neural Network Exchange (ONNX) and Google Android NN API. The SD845 chipset supports up to 4K Ultra HD video capture @ 60fps. If we look back in 2018 it is one of the most powerful processors and Snapdragon 845 is used in many flagship devices of the year. Some of the Best Smartphones powered by Snapdragon 845 SoC are listed below.

It was launched back in 2019, MediaTek G90T is the mid-range gaming processor that is made on the 12nm process. It is packed with the integrated LTE modem that supports Cat-12 600 Mbps download and Cat-13 150 Mbps upload speeds. MediaTek G90T powers many of the popular Smartphones, some of them are listed below.

You can see the detailed comparison of Snapdragon 845 Soc Vs MediaTek Helio G90T below.

From the above comparison, you get a clear picture of which one is better. We hope our comparison of Qualcomm Snapdragon 636 vs Snapdragon 625 would have helped in choosing the right processor for the next smartphone.