Recently there has been rumors that according to repair experts a design flaw in the making of iPhone can cause the screen stop working. iFixit a repair specialist identified this issue “touch disease” it has been noticed that a gray bar will appear around the top side of the phone’s display then eventually the phone will get glitchy and at a point, the phone lose the functionality of touch forever.

Apple is being accused of not addressing this design flaw which is causing touch problem to thousands of users. This problem is faced by users who are operating iPhone 6, and 6S handsets. When it comes to buying an iPhone everyone puts their money with full hope for a good service and Mr. Mawston said “Apple is facing its toughest year for the iPhone, With global market share falling rapidly. 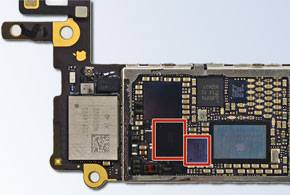 “What started as an unfortunate trend, now seems to be growing into an epidemic,” According to a report of iFixits Julia bluff. She interviewed a handful of independent electronics repair experts and micro soldering specialists. According to Bluff, while the issue appears to be touch-screen-related, But it actually breaks down to two touch-screen controller chips which are causing the glitch, or Touch ICs, on the logic board which is responsible for the problem.

Jessa Jones, One micro soldering specialist, with iPad Rehab, described the design as connecting the chips to the board with teensy solder balls, “like a plate resting on marbles.” Jones told iFixit “At first, there may be no defect at all. Later, you might notice that the screen is sometimes unresponsive, but it is quick to come back with a hard reset”. As the crack deepens into a full separation of the chipboard bond, the periods of no-touch function become more frequent.

A user handle Ruyi_H wrote “My iPhone 6 Plus keeps on having weird flickering grey/white vertical lines that drag down from the top of the screen on a regular basis, it only stops when I hit it in the back really hard and sometimes my iPhone screen is unresponsive, I wouldn’t be able to click on any apps that I want to and sometimes the Phone would open up another app”.

Another user walmark wrote on an Apple discussion board in March “About 2 weeks ago I started seeing the flickering lines on top of the screen of my iPhone 6 Plus 64Gb, along with a non-responsive screen. Giving the phone a little ‘twist’ seems to help for a little bit, but the issue comes back. The phone is 57 days out of warranty”.

A board repair expert Louis Rossmann, on a youtube video with the Rossman Repair Group, said Apple doesn’t tell customers that an independent repair shop can fix the problem.

Rossmann said, “The only option Apple offers to people who encounter this problem is, Would you like to buy a new iPhone?”