In 2020, the global smartphone market was hit by the epidemic. The total annual production volume was only 1.25 billion units, an annual decrease of 11%. By the way, this is the largest decline in history. Anyways, as for the world’s top six brands, they have the following ranking: Samsung, Apple, Huawei, Xiaomi, OPPO and VIVO.

According to the latest forecast report released by TrendForce‘s Semiconductor Research Division, the top seven smartphone rankings in the world will undergo a reshuffle in 2021. The biggest difference is the change in Huawei’s market share.

In terms of rankings, Samsung, Apple, and Xiaomi will be among the top three, OPPO will rank fourth, and VIVO will rank fifth. Interestingly, Transsion will rank sixth, and Huawei will fall to seventh. 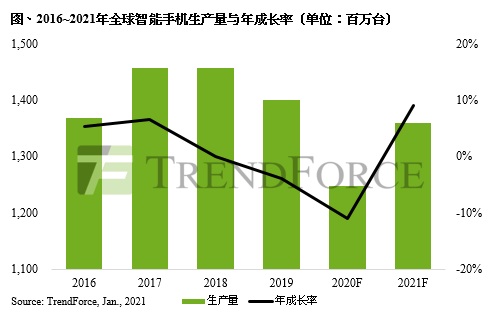 Based on the current situation, TrendForce estimates that the top six global seats in 2021 will be Samsung, Apple, Xiaomi, OPPO, VIVO, and Transsion. The above six will cover nearly 80% of the global market. However, the epidemic and the international situation are uncertain. Coupled with the shortage of foundry capacity, the future direction of the industry is still variable.

Huawei’s annual production performance was affected by the ban and the split of Honor. So the research institute thinks it will drop to seventh.

TrendForce further pointed out that from the beginning of 2021, Honor will be officially split from Huawei. If the subsequent Huawei ban is lifted, it will compete with the new Honor brand, and it will be difficult for Huawei to return to its former market share.