In an event in China, a senior official has cleared the upcoming Honor X10 5G handset to arrive in May. Amidst speculations, now, the smartphone is confirmed to host 6.6” display panel along with the 4300 mAh battery. Here is what we know all.

The smartphone brands in China have now started to stretch weeks after the recovery from the ongoing coronavirus epidemic. During the recent few days, we have come across several smartphones launches from Chinese manufacturers.

Now, Huawei is looking forward to extending the list further by introducing the latest 5G device in May. A senior company official confirmed yesterday the arrival of the Honor X10 5G phone.

At first, it is worth mentioning that the Honor X10 is the rename of the Honor 10X. As per officials, it is to avoid confusions with the Redmi 10X. The announcement regarding the name change was made at the GMIC (Global Mobile Internet Conference) in Beijing.

When it comes to specifications, we are still unaware of most of the hardware prospects except for a few. As the new name indicates, it is expected to be the successor to the Honor 9X, which was launched last year.

As of now, we have come to know that the Honor X10 5G phone will install a diagonal 6.6” display on the front. Similarly, the powerhouse of the device is assured of hosting a 4300 mAh battery.

In other areas, the 5G device is likely to bring several upgrades over the previous generation smartphone of the same fraternity. We can expect improved modules in the camera, processor, software and storage slots. The principal enhancement will definitely be the support for the 5G network. As we know, the Honor 9X was launched with 4G connectivity. 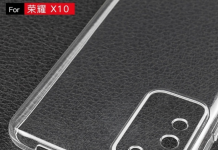