We all have been waiting for that split screen mode on all android devices. First when we saw it on Samsung’s top-end smartphones. We all dreamed of it also devs from developers has provided a solution for this already but that needs root and some exposed modules, Which simply doesn’t get in our head. Many people are afraid to root the devices because it voids the warranty of the software. Now no need to worry about all that root stuff. Android has recently introduced its new os update of Android Nougat in few Nexus devices.

Without further due let me start the procedure about how to use the split screen mode in any Nougat update device. This tutorial has been tested in one of the nexus devices. So you might want to read carefully to try it in other devices.

To go to split screen mode, You should open an app then just minimize it. Now open another app and press recent apps button and you’ll find a different interface. Now you’ll see two apps which you have opened and there will be an add icon and The scrollable card deck function is same like you get when you’re using many apps.

But here there are few apps which don’t support the split screen window option but the apps which support it can be added by just tapping on it and you’re good to go watch the image below.

For example, I’m using google maps and a messenger, Now open google maps first then minimize it, Then open messenger and minimize it. Choose the first app by clicking recent apps button.

Here google maps are selected first so the app interface is on the left side. Now after you open the google maps then click recent apps button and then hold the messenger app it will move with your finger just place it on the right side of the maps and resize the windows. You’re good to go. 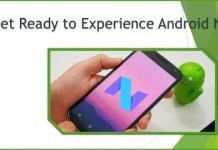 How To Get Android N Experience On Any Android Device