Shenzhen is known as China’s capital of innovation and technology, so-called China’s “Silicon Valley” has a Huaqiangbei (also knowns as “Huaqiang North”, a street name in Shenzhen) commercial street, which is the birthplace of “Shanzhai” culture (Shanzai actually means copycat). In our previous posts, we introduced some industries in Huaqiangbei such as refurbished iPhone, the most well-known is the Shanzhai mobile phone, anyway, copycat mobile phones have long been disappeared from Huaqiangbei. With the hot sales of Apple products, the Apple industry chain in Huaqiangbei has begun to rise again, Airpods is one of them.

The 1st-gen Airpods was first released in 2016. As of 2017, shipments were about 14 million units, and in 2018 it reached 35 million units. The growth rate reached 150%, accounting for about 76% of the annual shipments. According to the latest data released by Counterpoint, in the first three quarters of 2019, global sales of TWS headset products have reached 77.5 million units, and AirPods’ share of global shipments has dropped to 45%.

AirPods’ decline in the proportion of the industry’s scale is due to the limited production capacity of supply chain manufacturers, and the other major brands are catching up. In the third quarter of 2019, the market share of Xiaomi and Samsung increased linearly, ranking second and third in the market. Especially Xiaomi, whose cheapest TWS headset has fallen below 200 yuan (~US$28), quickly grabbed a large market share by using low-price strategies.

However, the shipments of these branded manufacturers maybe only the “tip of the iceberg” in the current TWS headset market. In an interview, the general manager of a technology company in Shenzhen once said, “We believe that there are about 300 million chips in the entire TWS headset market sold this year (2019). These are the large number of unbranded TWS headset shipments that further boost the popularity of this market.” The unbranded TWS headset with large market scale, which is difficult to put on the table, is right the protagonist of today’s article – Huaqiangbei Shanzhai AirPods.

Huaqiangbei Airpods directly refer to clones, copycats, knockoffs or imitations of Apple’s genuine Airpods series TWS headsets, although some of Huaqiangbei Airpods are put on its brand names having the same appearance. Huaqiangbei, once famous all over the world for its fake mobile phones, has targeted Airpods and other products. Apple products have a large number of enthusiastic fans in China and around the world. Among all the Apple products, Airpods are selling hot, but the price is relatively expensive. It’s not friendly for consumers who are a bit hard up, this is the niche Huaqiangbei made knockoff Airpods with an extremely high-cost performance at very low prices, and these kind of products are undoubtedly excellent alternatives for Apple fans who do not have the ultimate pursuit of headset sound quality. In fact, this is the same as the second-hand iPhone or refurbished iPhone market, at least many Chinese people pay for it.

Huaqiangbei knockoff Airpods are mainly sold as Airpods 2nd-gen and the 3rd-gen Airpods Pro. Knockoff Airpods in Huaqiangbei is mainly divided by chipset name. There are two different camps: Airoha (Chinese say “洛达” – similar to the pronunciation of “Roda”) and Jieli (pronunciation of Jieli is similar to English name “Jerry”). Airoha is the Taiwan IC supplier Airoha Technology in Taiwan, which provides high performance, cost-efficient RF and mixed-signal IC components and Bluetooth Low Energy (BLE) SoC solutions; Huaqiangbei’s Airpods are currently integrated with Airoha’s AB1536 chipset; The other mainstream is Jieli, it is a chip supplier in Zhuhai, China. There are also other chips solutions such as Realtek, Qualcomm, and Bestechnic, but the products with these chipsets are either high-priced or low-quality, so they are not mainstream in the market.

Simply say, Airoha’s chipset solution is the most stable and best in sound quality, it is also the most common in the Huaqiangbei market, while Jieli is a Chinese chipset, it is a cheaper alternative, price of Jieli product are much cheaper than Airoha, the disadvantage is high power consumption, standby time is short, Jieli solution is instability caused by disconnection and interference.

Airoha’s Bluetooth headset solution is not only used in knockoff Airpods but also widely used in headset chips of first-line brands such as Philips, Edifier, so compared to the two solutions, the stability of Huaqiangbei’s knockoff Airpods with Airoha are better.

What is the product strength of Huaqiangbei knockoff Airpods?

By comparing with the original one, how hell the similarity can Huaqiangbei Airpods achieve? This is probably the most concerning issue for people who want to buy. Let’s go a deep investigation:

Huaqiangbei’s Airpods is the most “mature” in the 2nd-gen, especially the appearance. This is also the advantage of Shenzhen. No matter which chipset solution they use, the appearance can basically achieve a similarity of more than 95-99%. It is almost impossible to see the difference if you don’t compare with the original one, even the packaging and coding of the earphones are similar to those of the original one, which can’t be said to be exactly the same, but it is not easy to find the difference without careful comparison. However, if you buy it in some online platforms, there could be no coding, and packaging may be very different from the original, or it cannot be the same. As for the reasons, we guess you should know it.

The following is the review of knockoff Airpods 2nd-gen with Airoha solution by professional Chinese fans: 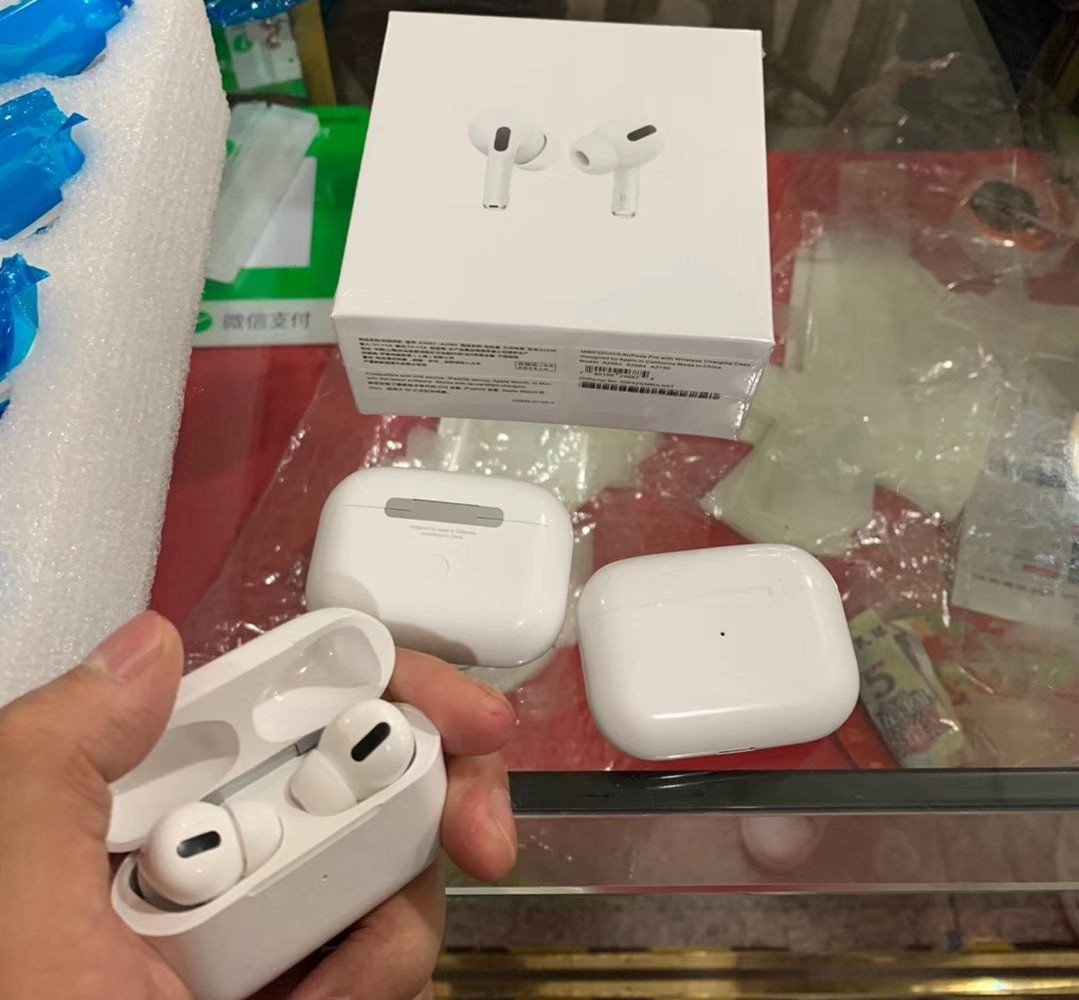 The sound quality of the third generation is obviously better than Airpods second generation. This is because the three-generation is an in-ear headphone, which has considerable advantages, anyway, product quality varies in different merchants/shops.

The chipset of knockoff Airpods Pro is still dominated by Jieli or Airoha. At present, the mainstream chip of Huaqiangbei Airpods Pro is Airoha 1536u.

Many major manufacturers have not solved the sound delay, the third generation is similar to the second generation. It is enough for daily use, and you can’t feel too much delay.

For Android users, the experience is also very important. Apple Officials don’t want to give up Android users, neither does Huaqiangbei. On Android, except for displaying pop-up animations, other basic functions are kept the same.

Huaqiangbei’s knockoff Airpods are available in many versions. It should be said that the prices and workmanship in different merchants/stalls are different, the experience will also vary greatly. If you take a chance visit here, you will find a very interesting phenomenon: dozens of businesses are selling this headphone, and dozens of businesses claim that their headset is the best, while the price is still different. Actually, every merchant/stall is backed up by large or small manufacturers, some small workshops use inferior materials and cut corners in order to reduce costs, it has led to very chaotic prices in the entire market.

The merchants that sell knockoff Airpods mainly gather in the SEG Communication Market and Longsheng Mobile Phone Accessory City. Pay attention to observations, shop counters with full of Airpods or packages are generally the merchants in this business. Try to show your profession when communicating with merchants. Of course, friends who have read this article will have a good understanding of knockoff Airpods, right?

But even you come to the Huaqiangbei market, you may still encounter various traps. Some stall owners will judge whether you are a novice based on your words and deeds, then they show you different quality of products. In order to make huge profits, some merchants claim Jieli chips as Qualcomm or Airoha and sell it, which not only achieves a price advantage but also ensures high profits, so you have to pay more attention to those with very low prices!

Therefore, we recommend that you shop around, or it is better to go together with a local friend who is familiar with the market. If you are a wholesaler, purchase different samples from different merchants, number them, spend time testing, or even dismantling, find the best one, and then return to the market to communicate with the merchant.

Regarding the price, the price of knockoff Airpods with Jieli solution is generally less than 100 yuan (~US$14), and the products with Airoha solution are generally 1** yuan. Compared with the original price of Airpods, it is indeed possible to buy 90% of the original quality at a price of 10%.

The post is contributed by The7Sourcing.com, The7Sourcing is a Shenzhen based product sourcing agent in China, it provides professional sourcing service for various Chinese products, especially electronics. If this article is helpful to you, share it with other friends, let more friends know, thank you!