Honor and Huawei both are bringing various new devices to the market. Honor recently announced the X10 series Honor Play 4 and Play 4 Pro series in China. Huawei also launched several new devices, and many launches are pending. Huawei Enjoy 20 Pro, and various unnamed devices bearing model numbers TEL-AN01, CDY-AN20, CSY-TN20, JEF-AN20, and JEF-TN20 are expected to launch in the next few months. Surprisingly, another device with model number ASK-AL20 has appeared on TENAA. 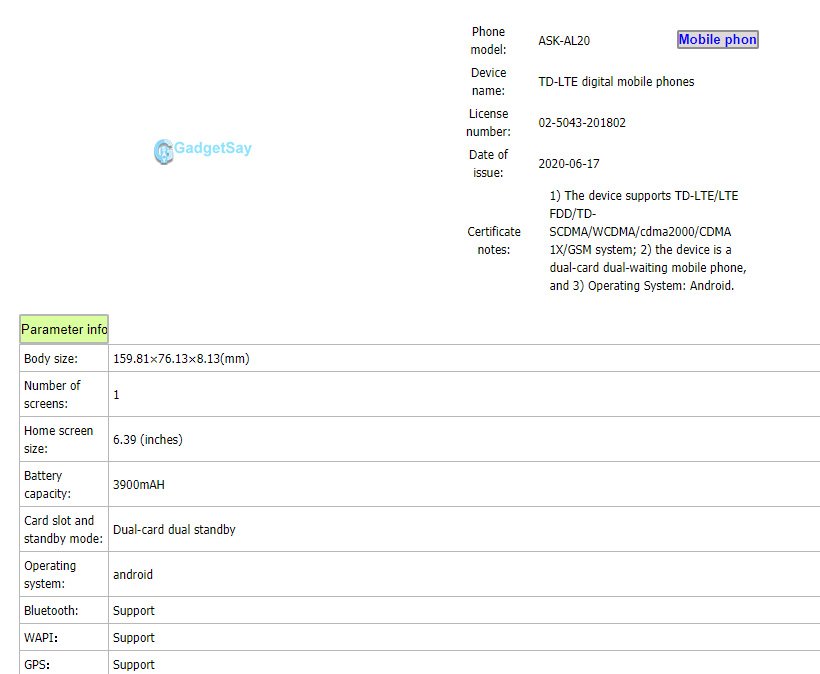 It also features specifications similar to the devices that leaked a few days ago on TENAA. Huawei/Honor ASK-AL20 features a 6.39-inch display. It houses a 3900 mAh battery and measures 159.81×76.13×8.13(mm) in size. The smartphone is dual-SIM and dual-standby supported along with connectivity features like Bluetooth, WAP, and GPS.

The images are not yet available, but we expect images to surface in the next few days. Apart from this, there’s hardly any other information as of now.

Additionally, Honor X10 Max was recently leaked along with a large display and Dimensity 800 SoC. The Honor or Huawei JER-AN20 and BMH-TN20 also appeared on the WiFi alliance and 3C certification. The smartphones have also registered various new patents including side-touch camera smartphone design with a physical power button like Huawei Mate 30 Pro.

Overall, a lot more from Huawei and Honor is left for this year. We have to wait and watch as the information is not once quoted by any official sources.