This afternoon, a well-known Weibo blogger posted that the machine was originally scheduled to be equipped with a 50MP IMX 700 as the main camera. But now, due to the shortage of components, it will be replaced with a 64-megapixel sensor. 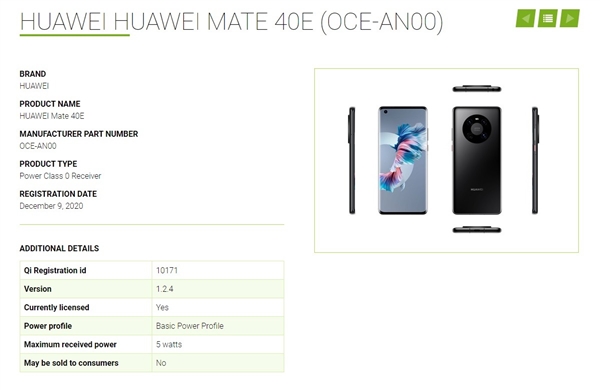 It will come with the OV64A sensor from Pride, with a 1/1.34 inch outsole, a single pixel size of 1um, support for four-in-one pixels up to 2um. Plus, it will support three exposures, four-in-one HDR, on-chip combination and the tone mapping function can provide stable high-quality image output.

The Huawei Mate 40E had been certified early last month. The documents display that the phone will use a 6.5-inch OLED screen with a resolution of 2376 * 1080. Under the hood, it will carry a 2.86GHz frequency chip. We guess it should be the Kirin 990 5G.

The Kirin 990 5G is the flagship 5G chip that Huawei previously launched on the Mate 30 series. It uses the world’s leading 7nm+ EUV process at the time. It has a native integrated 5G baseband with a smaller area and lower power consumption. The flagship SoC with the Vinci-based NPU has strong overall performance.

In terms of appearance, E maintains the same design as the Mate 40 model. The front uses a hole-punch curved screen, which also supports a 90Hz refresh rate. The back also uses a ring-shaped camera module solution.

At present, Huawei has not disclosed relevant information about the Huawei Mate 40E. But since it has passed the network access certification, there is every reason think that the machine is not far from the official listing.