This morning, Huawei officially announced that Huawei’s new generation of folding flagship Mate X2 will be released on February 22. Now, a Weibo blogger showed the rendering of the Mate X2 engineering machine. 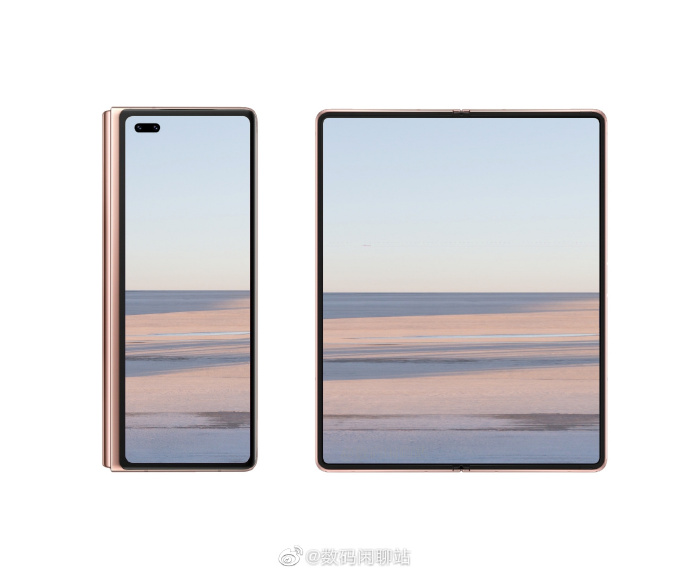 The blogger said that Huawei Mate X2 is quite thin and light among folding screen phones. There are no openings on the main screen and double openings on the upper left side of the secondary screen.

The Huawei Mate X2 will be equipped with Kirin 9000 processors. Also, the phone will adopt the in-folding dual-screen design. The main screen size is 8.01 inches and it has a 2480×2200 resolution. The secondary screen is 6.45 inches and has a 2700×1160 resolution. The Huawei Mate X2 has a built-in 4400mAh battery that will support up to 65W fast wired charging and ad wireless charging option as well.

There is also a quad-camera module, which consist of the 50MP + 16MP + 12MP + 8MP sensors combination. It also includes a periscope telephoto lens and supports 10x hybrid optical zoom.

In fact, this handset should be launched long ago. But because of various reasons, its launch date was pushed back for several times. However, this morning, the company confirmed the early news, saying that the Huawei Mate X2 will come at the end of this month. As for now, we can state that the company has solved all problems related to the processors and production. And in a couple of weeks, the next-gen folding screen smartphone of Huawei will hit the market.

Moreover, this is very important for Huawei not only in terms of competing with Samsung but also of its rivals in China. We mean, recently, we learned that Xiaomi, OPPO and VIVO will bring their folding screen handsets as well.