Huawei is expected to release the Mate 40 series of flagship phones in October. In addition to this, there is information indicating that the Mate X2 may also be officially launched in the near future.

Recently, a Huawei device appeared in the database of the Ministry of Industry and Information Technology. It should be the Mate X2. The device code name is Teton. Now, the device has received the vital Wi-Fi Alliance approval, again indicating that the device may be launched soon. 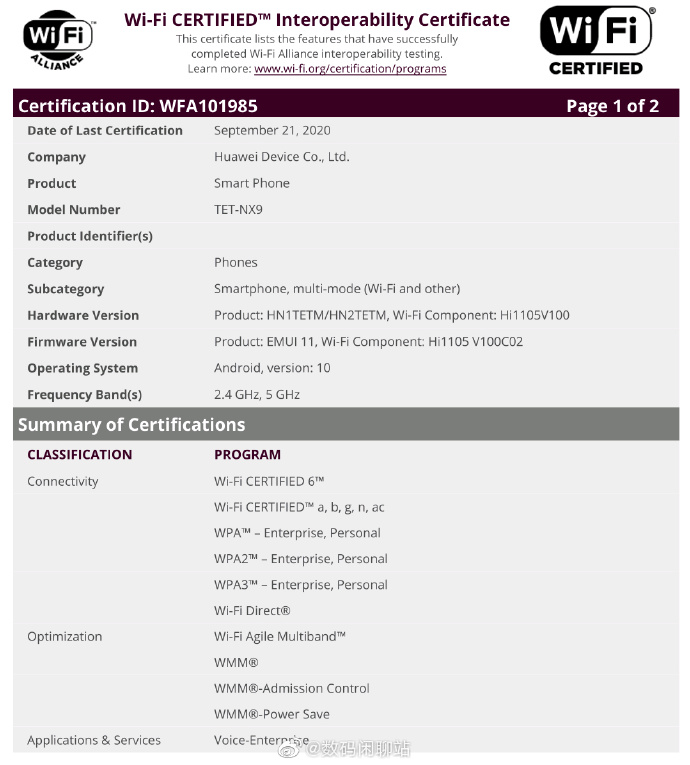 The Mate X2 Wi-Fi certification screenshot revealed by the tipster shows the model is TEX-NX9. Information shows that the device supports Wi-Fi 6, and is pre-installed with Android 10 OS.

In August, some leaks pointed out that the Mate X2 screen will start production this month. It is expected that this foldable phone will adopt a folding design like the Galaxy Z Fold 2, instead of the outward folding design on the previous Mate X model.

It is speculated that the Huawei Mate X2 will come with an 8.3-inch CPI panel provided by Samsung. It will support a resolution of 2280 x 2220, and the screen may support a 120Hz refresh rate. The vertical bar where the main camera is located may have an additional screen. The device may sport a four-lens system of 40MP + 40MP (ultra wide angle) + 12MP (telephoto) + ToF. The Mate X2 can provide users with camera functions such as OIS and 3x optical zoom.