From recent news, a stunning order from “The Ministry of Information and Broadcasting” to ban NDTV India for a day in breach of the program code governing content in news channels. According to the ministry, this news channel’s coverage revealed “strategically-sensitive details”. But NDTV has denied everything about it. And the news channel stated that its coverage was “particularly balanced”. This 1-day channel block will be started from 1 p.m. IST Nov. 9 but it is not supported by many journalists in India.

Some of the journalists spread their thoughts telling ministry’s decision should be taken as a violation of freedom of the press. NDTV said in a statement “The order of the MIB has been received. It is shocking that NDTV has been singled out in this manner.

Every channel and newspaper had similar coverage, In fact, NDTV’s coverage was particularly balanced. After the dark days of the emergency when the press was fettered, it is extraordinary that NDTV is being proceeded against in this manner. NDTV is examining all options in this matter”. 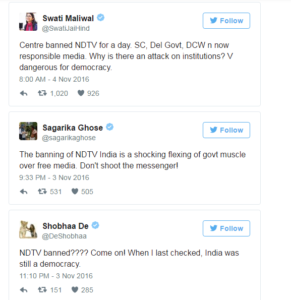 “Ammunition stockpiled in the airbase, MiGs, fighter planes, rocket launchers, mortars, helicopters, fuel tanks which were likely to be used by the terrorists themselves or their handlers to cause massive harm not only to national security, international standing of the country but also life’s of civilians and defence personnel.” The following weapons and armours were noted by the ministries.

“The Editors Guild of India strongly condemns the unprecedented decision of the inter-ministerial committee of the Union Ministry of Information Broadcasting to take NDTV India off the air for a day and demands that the order be immediately rescinded”.

it said, “The decision to take the channel off the air for a day is a direct violation of the freedom of the media and therefore the citizens of India and amounts to harsh censorship imposed by the government reminiscent of the Emergency.

This first-of-its-kind order to impose a blackout has seen the Central government entrust itself with the power to intervene in the functioning of the media and take arbitrary punitive action as and when it does not agree with the coverage”.

Also Read: Here’s Why Some Disappointed Apple Fans Are Moving To Ubuntu Linux