On April 24 afternoon, the Chinese tech maker Lenovo occupies the space by introducing the latest Yoga 15s laptop. The piece arrives with a spate of astute features on give users high-end computing experience. The company took to the official Weibo account to reveal the information.

Unlike the Yoga 14s, the Yoga 15s notebook device installs the ten-generation core alongside NVIDIA GeForce MX 350 in the GPU unit. The Yoga 14s houses the Ruilong processors. The Chinese firm further announces that the Yoga 15s will measure 15.9mm in thickness while it will weigh 1.8KG. The overall physical dimensions are 355x230x15.9mm.

In terms of CPU wing, Lenovo’s latest laptop model will show two choices – Intel Core i5-1035G1 and Intel Core i7-1056G7. Both processing units provide 1.0 GHz-3.6GHz and 1.3GHz-3.9GHz clock frequencies, respectively. When it comes to the Yoga 14s, it has both Ruilong and Core versions of chipsets. The Ruilong platform further consumes two models – R5 4600U and R7 4800U. 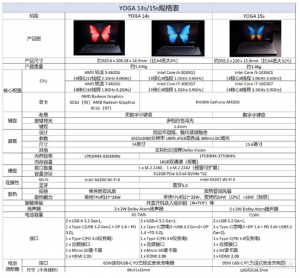 The Lenovo Yoga 14s laptop has a 65W charger and a 60.7Wh battery. It doesn’t support Thunderbolt 3. As per storage arrangements, both Yoga 14s and Yoga 15s come with onboard 512 GB PCIe memory.

For physical connections, Lenovo decorates both Yoga variants with multiple ports. The due shares 2 USB 3.2 ports, a Type-C port, a microSD port, an HDMI port, and others. Both also have Bluetooth 5.0 and Dolby Vision speakers for sound output.

Well, the Lenovo Yoga 14s laptop will start taking preorders on May 11 and kick off the sales from May 15 onwards.