Meizu is gearing up for the launch of its flagship device i.e. Meizu 17. Recently, Meizu 17 received the 3C certification in China. Today, the same device with model number M2081 is spotted on the AnTuTu benchmark where it gets impressive 580,851 points. Meizu 17 CPU running scored 181589 points, GPU running scored 218118 points, MEM scored 94377 points, and UX scored 86767 points. 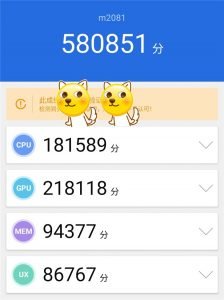 According to the AnTuTu listings, Meizu 17 is powered by a Qualcomm Snapdragon 865 soc 5G mobile platform. Moreover, according to the previous leaks and reports, Meizu 17 features a 6.5 inch AMOLED display with a 90Hz refresh rate. The phone will have LPDDR5 RAM and UFS 3.0 internal storage. It might come in two variants i.e. 8GB RAM + 256GB storage variant and 12GB RAM + 256GB storage variant.

Meizu 17 will carry a huge 4500 mAh battery with the support of 30W fast charging. The phone will have stereo speakers, Dolby Atmos, a vertical linear motor, and an in-display fingerprint scanner.

Talking about the camera, it is packed with a Quad camera setup at the back that includes 64MP primary camera + 8 MP Super-Wide angle camera + 5MP telephoto lens +2MP depth sensor. The front camera details are still unknown.

Related: Best Android Dialer Apps You can Use in 2020

Although, the launch date is not officially announced by the company. But according to some rumors and leaks the phone will launch on 15th April 2020. However, as soon as we receive an update about the official launch date of Meizu 17, we will update you here on Gadgetsay.