Xiaomi’s Mi 11 Series has been in the headlines for the last few weeks. Firstly, it was tipped to be powered by the Qualcomm Snapdragon 875 SoC. Following that, the Mi 11 was also tipped to house quad edged display last week. Earlier today, the Mi 11 Pro was tipped with important camera specifications. 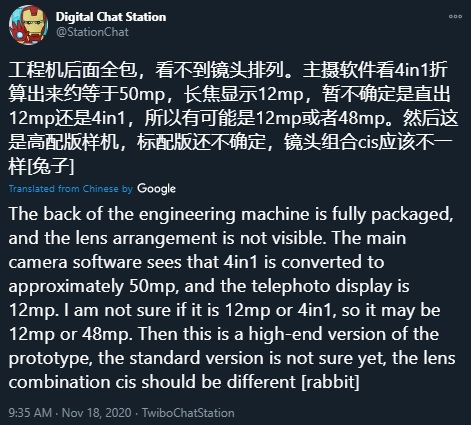 According to tipster Digital Chat Station, the upcoming flagship is expected to capture 50MP pictures from its primary cameras. Although according to him, the rear camera setup has already been placed, but couldn’t figure the lens segregation as of yet. However, he didn’t shy away from claiming that the 50MP picture output was possible because of the 4-in-1(pixel binning) process.

Apart from that, it’s clear that Xiaomi is somehow planning to implement a 50MP picture output. Considering that this will be their flagship smartphone, they wouldn’t shy away from marketing it in the coming times. Moving forward, the tipster has also mentioned the telephoto camera on the Mi 11 Pro. He states that it’s a 12MP sensor. However, he isn’t sure if it’s simply a 12MP sensor, or a 48MP sensor considering that the pixel binning is in play.

Keeping in mind that the company’s previous flagship Mi 10 Pro came with an 8MP telephoto sensor. This makes us believe that the Mi 11 Pro will indeed receive some camera upgrades. Since Xiaomi has already implemented a 108MP primary sensor in its predecessor, the Mi 11 Pro might retain the same.

So far, all we know is that the Mi 11 Pro will be powered by the Qualcomm Snapdragon 875 SoC which is based on 5nm architecture. It is expected to be the first device launching with this chipset. Apart from that, it will is expected to feature a QHD+ display with a 120Hz refresh rate. The front camera will reside under the punch-hole similar to its predecessor. It might also support the 120W fast charger that Xiaomi introduced with the Mi 10 Ultra.