Today, Micron Technology has launched the low-power LPDDR5 RAM chip that is supposed to deliver maximized bandwidth and energy efficiency specifications. As per the official reports, the latest RAM chip will be embedded in Motorola’s new Edge+ smartphone.

Micron is a leading manufacturer of storage and memory solutions. Currently, it is working in collaboration with smartphone maker Motorola to install the new chip in the Motorola Edge+ phone. The handset is featured with industry-leading Micron 12GB LPDDR5 DRAM chip to serve users with faster and smoother 5G performance.

Furthermore, the latest combination of LPDDR5 and high-end processing unit will deliver faster data transmission speed as well as lower latency of the 5G platform. The smartphone also brings fortified performance to cloud applications like live entertainment and online games.

The joint-venture comes out to develop top-notch processing performance and high-bandwidth memory. Ultimately, it enables Motorola Edge+ users to cultivate full benefits of the unmatched speed of 5G networks.

According to the statement given by Micron’s Mobile Products’ Division’s Vice President and General manager. The collaboration among Motorola and Micron indicates that mobile producers push great importance to the advanced storage solutions to achieve higher performance and richer experience for end-users.

On the other side, the smartphone owner Motorola also carries higher expectations from the LPDDR5 chip. According to the official statement, customers always prefer more efficient, faster and more powerful smartphones. Hence, we collaborate with Micron to produce that level of qualities for our Edge+ smartphone. Using this chip, we can expect the phone to provide professional-level performance in each segment like image processing, audio, data processing, and more.

Micron says that its LPDDR5 DRAM chip has potential to generate bandwidth by up to 50% than previous LPDDR4 version. 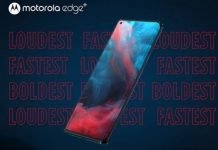 Motorola Edge+ flagship phone to land in India on May 19