Motorola is an on the verge to announce the new smartphones as new models have started appearing on several certifications. A set of model number XT2127-4, XT2127-2, and XT2129-1 which appears to be of Motorola Capri is seen on WiFI Alliance. The same devices were spotted on FCC and other certifications a few days ago. 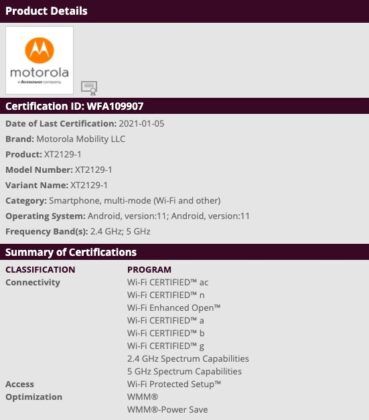 According to the new listing on WiFi Alliance, the Motorola Capri and Motorola Capri Plus support dual0band WiFi and will run on Android 11. However, any other information about the device is not yet available.

As per previous reports and leaks, the Motorola Capri Plus could feature Snapdragon 662 SoC, 4GB RAM and Android 11 OS. It will feature a 90Hz refresh rate, 128GB storage, 64MP quad-camera, and a 13MP front-facing camera. On the other hand, Motorola Capri was spotted with 5000 mAh battery on FCC a few weeks ago. It could come with 48MP quad-rear camera setup.

It appears the new device will launch soon, exactly later this month or in early February. We expect more information to unveil in the coming days.