Last year, Sony announced it stays in the smartphone industry with no hope of income. The Japanese company also added that the main reason of launching new models is to keep the finger on the pulse and understand what happens in this niche. This is quite reasonable because Sony supplies various components (especially, camera sensors). So it just has to know what people and manufacturers want. Otherwise, it clients will switch to other manufacturers, say, to Samsung. Anyways, this also means every year we will see at least one Sony smartphone. The second quarter of 2020 is coming to an end, but the company has only released three phones so far. And most importantly, they are only released in certain regions. However, in the second half of the year, we may see another Sony smartphone equipped with the Snapdragon 865 chip.

Yesterday, a mysterious Sony smartphone with model number 7Y6DU1I appeared on GeekBench. The screenshot shows that this phone will be equipped with the much-popular Qualcomm Snapdragon 865 SoC. Also, we can see an 8GB RAM and Android 10 operating system out of the box. 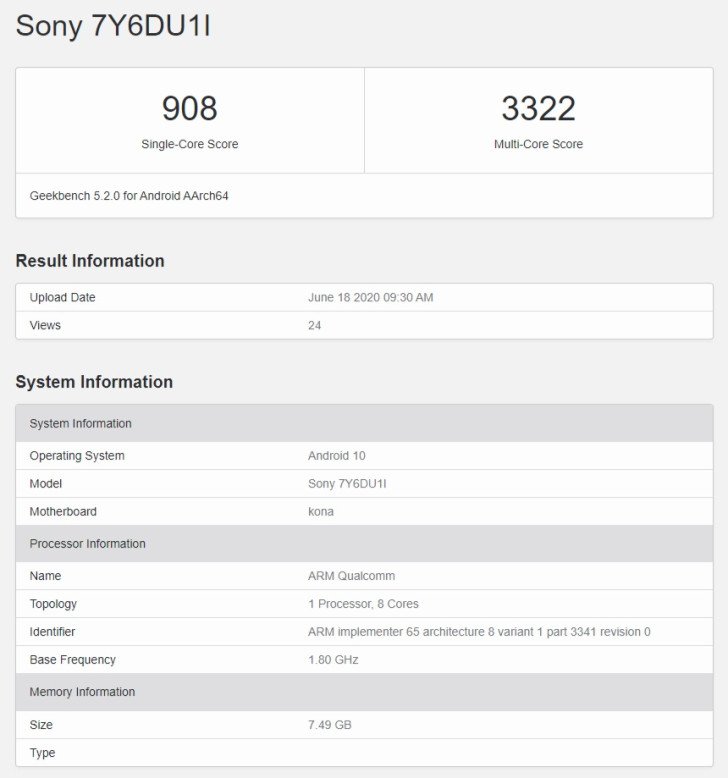 This is the second Sony smartphone equipped with a Snapdragon 865 after the Sony Xperia 1 II. However, we have no imagination when this device will be launched.

Another important thing is that the model of the phone does not follow Sony’s standard format, which usually includes five characters (eg 802SO – Xperia 1) or six characters (eg XQ-AT51 – Xperia 1 II). The device has seven characters – 7Y6DU1I. But at the moment, we have no assumptions about what this could mean.