The current Chinese smartphone makers are considered to be synonyms to innovation. And Xiaomi’s MIX series is on the frontline. According to the latest reports, this company is going to release a flagship handset sporting a 16GB RAM. But there has been news that the next Xiaomi high-end smartphone should come with an under-screen camera. This time, it’s denied – the new phone with a large memory will use a hole-punch screen design. And if you think it will come in the MIX series, we have to say that it will belong to another series. Personally, we think it will be a CC line handset.

The information comes our way from a well-known blogger, Digital Chat Station. He said that the next Xiaomi flagship will use a hole-punch solution. At present, there has been no checked information that the company is going to plan to mass-produce the front camera under the screen this year.

When talking about this handset, he said that the phone will have 16GB of RAM. 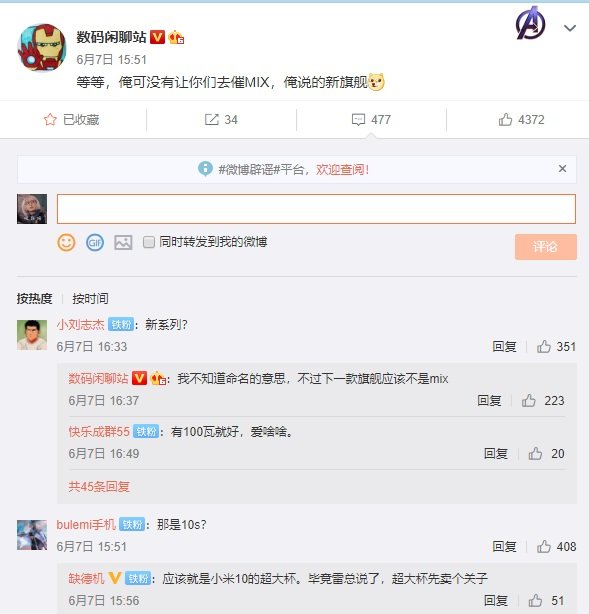 More importantly, the new machine does not seem to belong to the MIX series, but other series. Some users guessed that it might be the Xiaomi Mi 10 Pro Super Cup.

At the press conference of the Xiaomi Mi 10 Lite 5G and MIUI 12, Lei Jun came to the stage and said that they are going to release three smartphones from this series this year. They include the ‘Middle Cup’, the ‘Big Cup’, and the ‘Super Large Cup’.

Although it did not disclose any information about these phones, it seems the flagship variant is on the way. That time no one knew whether it belongs to the Mi 10 Pro or the Mi MIX series. But now there are many rumors suggesting it will refer to the Mi 10 line.

Some users even suggested that the Xiaomi Mi 10 Pro+ should be replaced with a 2K 120Hz display, have higher fast charging power, and add ToF on the back to form a penta-camera module.