A few days ago, a Xiaomi phone with a Snapdragon 875 new flagship platform was leaked. Especially, we could learn about its benchmark scores. There was no doubt that the performance level of this phone has reached the top level. And from the perspective of comprehensive running points, it is not ruled out that this flagship will exceed 1 million points in the future. 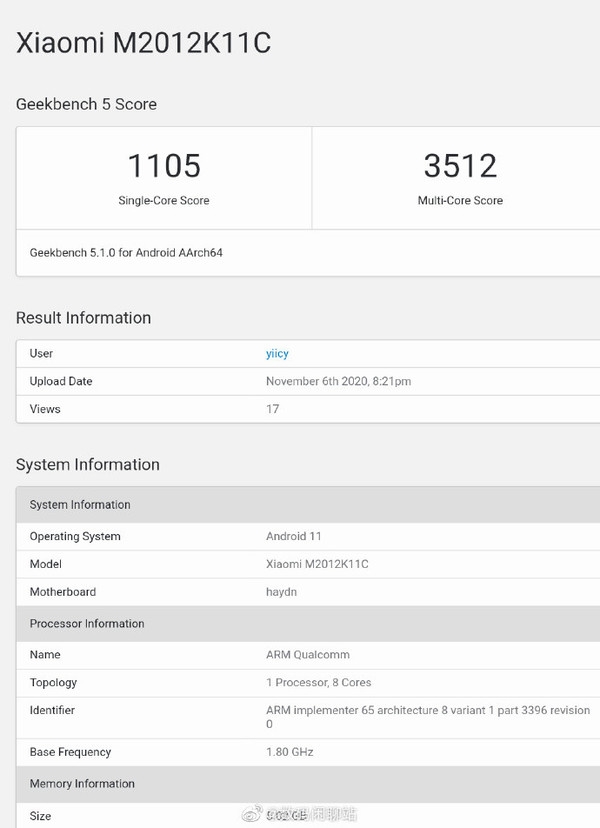 Well, let’s take a quick look at the GeekBench 5 running score of this phone. The single-core score is 1105 and the multi-core score is 3512. In terms of scores alone, such scores are now at the top level.

In addition, there was a previous Snapdragon 875 engineering machine with Master Lu’s running score of 899,401 points. So the running score of the official version of the smartphone is likely to reach 1 million points.

The Qualcomm Snapdragon 875 uses a 5nm process technology, and the CPU has a built-in 2.84GHz X1 super core, three 2.42GHz A78 large cores and four 1.8GHz A55 small cores. In the GPU part, this chip integrates the Adreno 660 graphics card. Also, the cache and memory bandwidth have been improved as well.

Anyway, there is no certain information what a smartphone we are dealing with. But if nothing accidental, this should be the next-gen Xiaomi annual flagship – the Xiaomi Mi 11.