There will be a few Nokia smartphones. And one of them is going to be the Nokia 3.4. Today, its render was leaked by a tipster. As we can see, it will use a circular rear camera module and a hole-punch screen design.

Apart from this, the alleged Nokia 3.4 was spotted in GeekBench with a codename of DoctorStrange. As the GeekBench screenshot showed, the phone will come with a low-end Qualcomm Snapdragon 460 SoC, paired with a 3GB RAM. 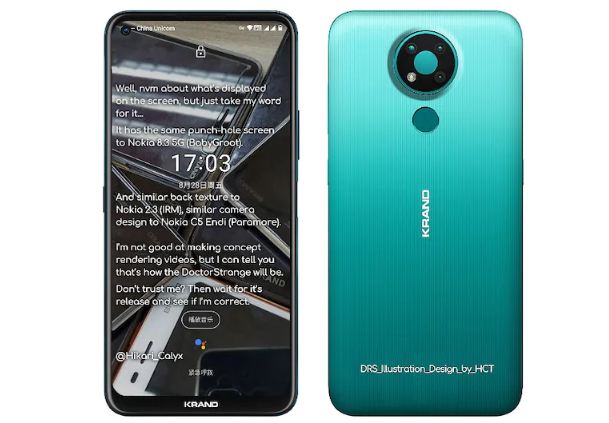 The hole on the screen will host an 8MP selfie camera. The circular camera module will consist of three sensors and an LED flash. They will have resolutions of 13-megapixel, 2-megapixel, and 5-megapixel. Also, we can see that the fingerprint recognition module is placed below the module.

Moreover, the Nokia 3.4 appears to have the same hole-punch screen as the Nokia 8.3 5G. But the back panel texture is almost identical to the Nokia 2.3. Plus, the phone has inherited the circular camera design of the Nokia C5.

As for the display, the Nokia 3.4 should feature a 6.5-inch HD+ screen with a 19:9 aspect ratio. The phone is expected to sport a 4,000mAh battery supporting 10W charging.

We also think the Nokia 3.4 will be announced along with the Nokia 2.4 at the IFA 2020 trade show. It has been set to take place in Berlin from September 3 to September 5. Thus, in a few days, we can see a couple of new budget-friendly Nokia phones with a decent specs list.