From recent news, it is now confirmed that Nokia is launching two smartphones in 2017. Recently Nokia’s Mobile brand license was sold to HMD according to Mobile World Congress website and recently at the MWC (Mobile World Congress) 2017 it was confirmed about the launch that along with 2 high-end flagship devices there will also be a Midrange smartphone in the year 2017 at the event.

Also Read: Facebook Will Now Help You To Find a Nearby Free WiFi Hotspot

Through Antutu benchmark site a Nokia smartphone got leaked and it was Nokia D1C. This smartphone’s specifications were listed as it will come with a Full HD Display , Snapdragon 430 processor, 3 GB RAM, 32 GB internal storage and a 13 MP main camera. However, these specifications are not confirmed yet officially.

With that being said there will be a one more new high-end Nokia smartphone coming up in 2017 and the specifications were listed as it comes with a 2K AMOLED screen and Snapdragon 821 processor. As for now, Nokia is not manufacturing any of its smartphones.

But HMD has got the license from Nokia and all the sales and distribution of devices will be done by HMD. And manufacturing partner for HMD IS Foxconn so with that being said Nokia smartphones will be made and manufactured by Foxconn. At present even Apple iPhones are also made by Foxconn.

Here is the structure that Nokia has officially shared and also check the road map. 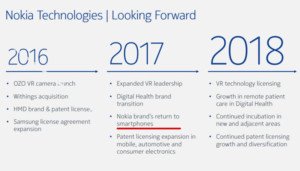 According to the telegraph notes, “Apple dominates the high-end, especially in the West, and Samsung is a fierce competitor. Asian smartphone manufacturers – Oppo, Xiaomi, Huawei, Vivo – are eating into the feature phone market that was Nokia’s playground. Other respected names, such as Sony and LG, have struggled to have a real impact on the market. Motorola and BlackBerry, two other once-mighty phone makers, have not been able to trade on the back of their legacies: there’s no immediate reason that Nokia should be any different.”

Also added “The smartphone market, now bereft of innovation, has become ruthless, with profits difficult to come by. One suspects Nokia has missed its opportunity. We should wish it all the best, but the odds are stacked against it.”