According to GSMArena, the protective film manufacturer Case-Mate released a picture that shows the appearance of the OnePlus 8T. But we can assess the overall appearance because the case shows only the back of the device. 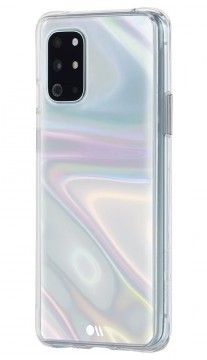 Combined with the renderings released by @OnLeaks, the machine will use a rear rectangular quad-camera module. In addition, it can be seen from the real machine picture that the OnePlus 8T seems to use two LED flashes. But it does not rule out the possibility that one will have special uses, such as sensing light or color temperature.

In addition, the right side of the machine still uses the power button + slider design. And the left side carries the volume button.

According to the current official information, the OnePlus 8T will use the same 120Hz Fluid AMOLED 6.55-inch FHD+ display of the OnePlus 8 Pro. It has passed DisplayMate A+ certification.

Also, it come with a dual-C cable + C-mount charging head. This can be used not only for data transfer but also for charging the built-in 4500mAh battery. By the way, the latter supports the new Warp Charge 65W fast charging. It can charge 70% in 20 minutes.

The OnePlus 8T will be another Snapdragon 865 chip with a 12GB of RAM. This handset also comes with the Android 11 operating system out of the box. In other aspects, the machine is expected to adopt a rear 48MP + 16MP + 5MP + 2MP and a front 16MP lens solution. It is 8.4mm thick and weighs 188 grams.

The OnePlus 8T will be officially released on October 14. The price may be set at around 799 Euros.