According to 91Mobiles, the specifications of OnePlus 9 and OnePlus 9 Pro have appeared on the benchmarking website GeekBench.

Its press conference is scheduled to be held in India on March 23, while the China press conference will be held at Shanghai Oriental Sports Center on March 24. The company also confirmed some model details, such as design and camera specifications. The company has reached a cooperation agreement with Hasselblad to provide mobile imaging systems for the upcoming flagship series. 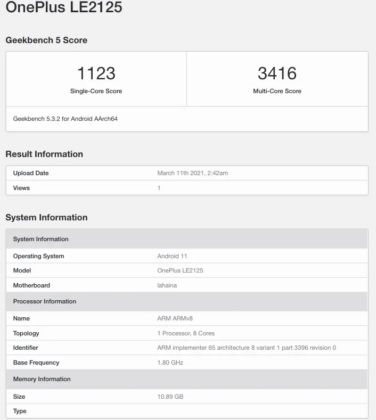 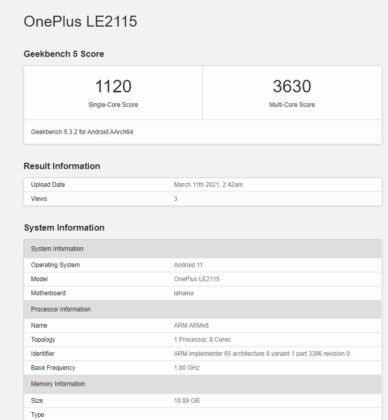 According to the GeekBench list, the OnePlus 9 and OnePlus 9 Pro will be equipped with a chipset codenamed “lahaina”. This is the Snapdragon 888 processor. We think the standard version will sport the same chip. Both variants will come with 12GB of memory and run on Android 11.

OnePlus has announced the design of the OnePlus 9 Pro, revealing its gray body shape and rectangular camera module. This smartphone will sport a quad-camera. OnePlus has confirmed that it will include a 50-megapixel Sony IMX766 ultra-wide-angle lens. There are also three sensors, namely a 48-megapixel IMX789 main camera, an 8-megapixel telephoto lens and a 2-megapixel lens. The latter two lenses support laser autofocus. The machine also supports recording 8K video (30 FPS) and 4K video (120 FPS). The OnePlus 9 Pro should also come with a 120Hz QHD+ display. The model has three colors of black, green and silver.

The GeekBench model list has confirmed that this OnePlus 9 Pro sports the Snapdragon 888 chipset and up to 12GB of RAM, and may be equipped with 256GB of internal storage space. The phone may support 65W fast charging. Other features such as 5G, wireless fast charging, stereo speakers, and waterproof and dustproof should also be present.