OnePlus has already released non-smartphone products such as TVs and earbuds. But this company has announced about its metamorphoses long ago. And we are waiting for new kinds of products to hit the market very soon. One of such products will be the smartwatches. The first OnePlus smartwatch will appear on the shelves shortly. And ahead of launch, we got tons of leaks. Particularly, Techniknews shared schematics of the upcoming model (alleged).

We knew that the company has patented an OnePlus smartwatch design on German Patent and Trademark Office (GPTO). Officially, the company hasn’t confirmed the design yet. But the patent documents and photos shows that OnePlus Technologies themselves have filed it. We mean the round dial design from this patent seems to be final.

Anyways, one of the sketches shows a round dial with flouted bracelet (straps). The watch has two buttons on the right size of the chases that are probably for UI navigation. On the back, there are sensors that could be for heart rate, blood oxygen, blood pressure and other health indicators monitoring.

Two connectors are also visible. They should be for magnetic charging. The source says that this could be the ‘Sport Version’ of the ‘OnePlus Watch’.

Besides this, we have got the second design from various sources before. It has a frame that extends slightly outer and also has a different strap design.

We are waiting for the first OnePlus smartwatch with a model W501GB to come sometime in March. This manufacturer will launch a watch with ‘OnePlus Watch RX’ moniker having a round-shaped dial and also a Watch with a square-shaped dial (model: W301GB). 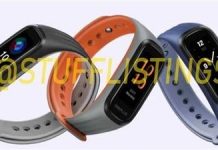 Dial styles of OnePlus Watch have been leaked