Moreover, there’s an in-display fingerprint sensor as appears in the smartphone manual.

The annual guide also confirms the presence of NFC. A punch-hole display is present on the board with a roughly measured 6.5-inch display. However, we are unable to guess any Chipset name present on the board of the smartphone. Battery information is also concealed under a wrapper. 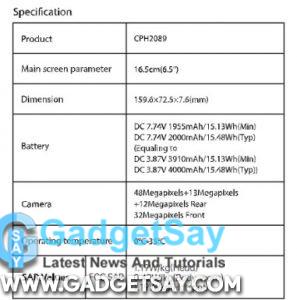 Precisely, in the camera department, the smartphone houses a triple rear camera sensor a 48-Megapixel primary sensor, a 13-megapixel ultrawide sensor, and another 12-megapixel sensor. There’s a 4000 mAh battery and measures a 159.6×72.5mmx7.61mm in size.

According to previous leaks, the smartphone will feature Bluetooth 5,1 and runs on ColorOS 7.2.