In November 2021, OPPO launched the Reno7 series of smartphones in the Chinese market. After a span of five months, the brand has launched the successor, the Reno7 series, in the Chinese market. That said, on the evening of May 23, the OPPO Reno8 series was officially released. The device comes with the world’s first Snapdragon 7 Gen 1 SoC, and the pricing begins from 2499 Yuan. OPPO has launched a total of three smartphones in the Reno8 Series. These are OPPO Reno8 Pro +, Reno8 Pro, and Reno8. We will look at each device in detail now. 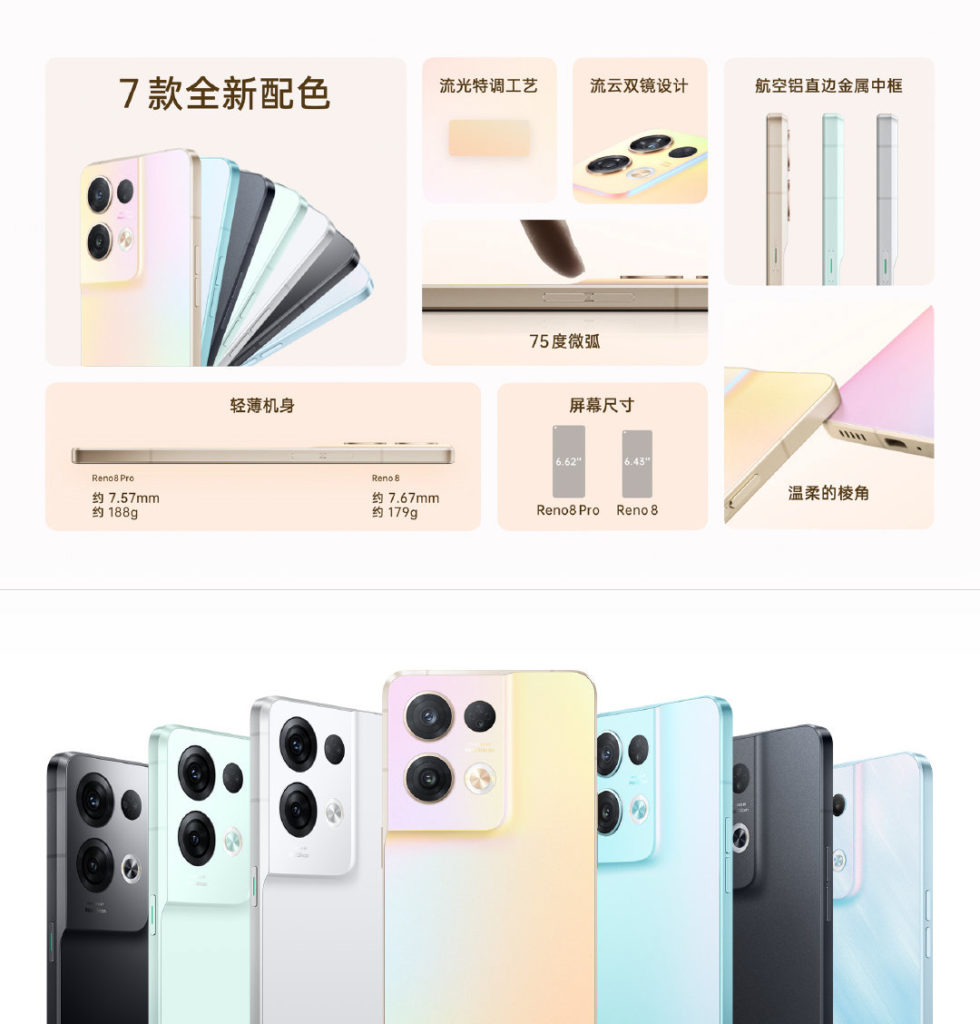 The premium model, i.e., the OPPO Reno8 Pro +, comes in three color options. These are Xiaoyao Green, Roaming Gray, and Undercurrent Black. It has a thickness of 7.34mm and weighs around 183g. The brand uses an aviation aluminum metal middle frame. OPPO Reno8 Pro+ equips with the MediaTek Dimensity 8100-MAX processor. It is the same chipset seen on the OnePlus 10R and is built using the 5nm process. The chipset pairs with LPDDR5 memory and UFS 3.1 flash memory. It also gets Mariana MariSilicon X self-developed NPU and super crystalline graphite cooling system. All this is backed by a 4500 mAh battery and supports 80W flash charging tech. 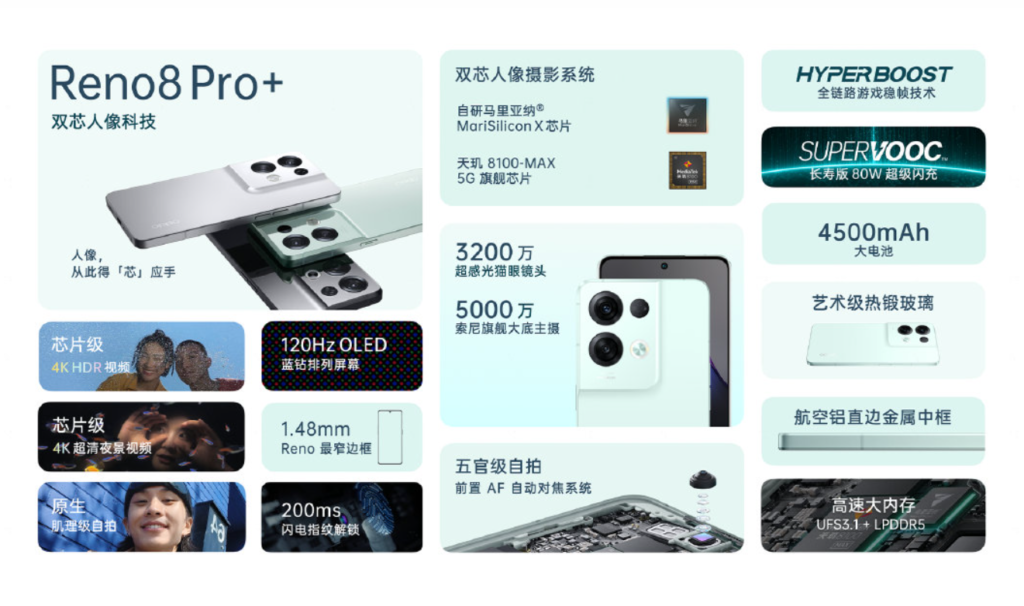 The OPPO Reno8 Pro + gets a 6.67 inches OLED screen with a resolution of 2400 x 1080 pixels. The screen supports a 120Hz refresh rate and up to 1.07 billion colors. The smartphone features a 32MP Sony IMX709 on the front in terms of imaging. It sits inside the punch hole. As far as rear cameras are concerned, it gets a primary 50MP Sony IMX766 sensor that supports OIS. The sensor pairs with an 8MP Sony IMX355 ultra-wide-angle sensor. Finally, it gets a 2MP OmniVision OV02B10 lens. In addition to this, the OPPO smartphone features an X-axis linear motor, dual stereo speakers, and supports NFC. It has an ultra-thin optical fingerprint on the biometric side, which can be unlocked in 200ms. 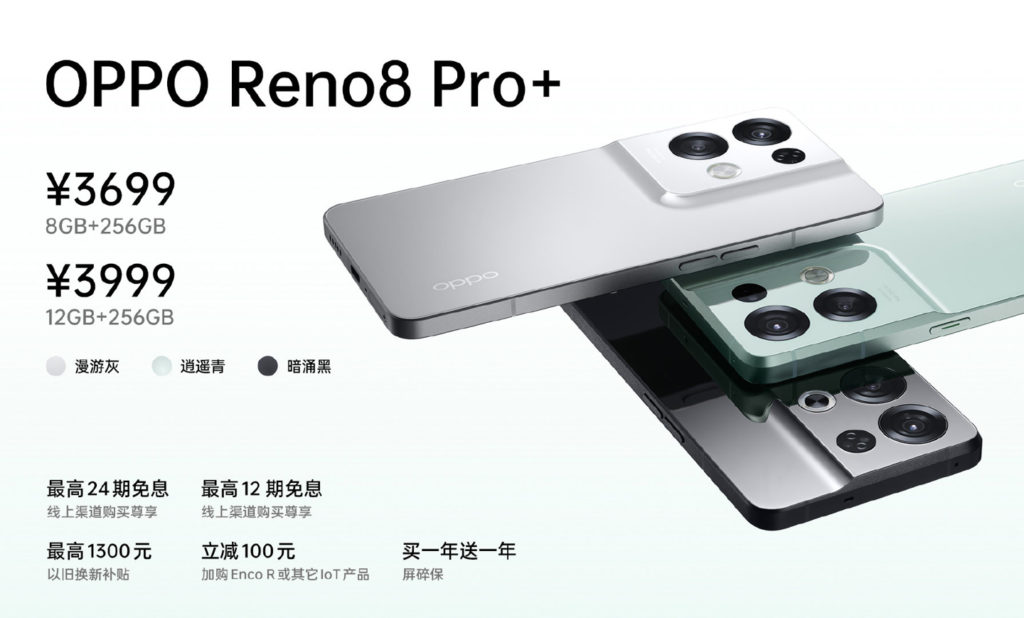 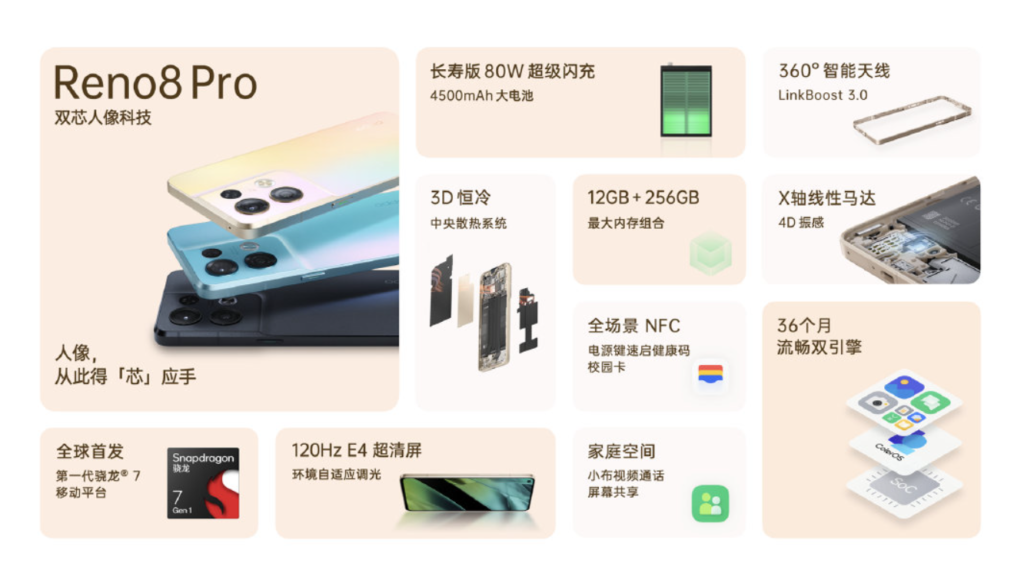 The OPPO Reno8 Pro is the middle device in the new Reno8 series. It comes in three color options to choose from. These are Slightly Drunk, Encounter Blue, and Night Tour Black. It has a thickness of 7.57mm thick ad weighs 188g. Like the Pro model, it too uses an aviation aluminum metal middle frame. The smartphone is the first device to be launched with the Snapdragon 7 Gen 1 processor. The chipset is built on the latest 4nm process. The chipset pairs with LPDDR4X memory + UFS 2.1 flash memory. It also equips Mariana MariSilicon X self-developed NPU and 3D constant cooling central cooling system like the Pro+ model. It also has a 4500 mAh battery and supports 80W flash charging.

The Reno8 Pro equips a 6.62-inch OLED screen that uses Samsung E4 luminescent material. It has a resolution of 2400×1080 pixels and a peak brightness of 1300nits. It also supports a 120Hz refresh rate. On the optics front, it has the same 32MP Sony IMX709 lens to the front. The rear cameras are also the same as Reno8 Pro +. That is, it gets a primary 50MP Sony IMX766 sensor with OIS and an 8MP ultra-wide-angle and 2MP macro lens. Like the Pro +, the Pro also gets an X-axis linear motor and supports NFC. However, the device has a single speaker. All the smartphones run on Android 12-based ColorOS 12.0. 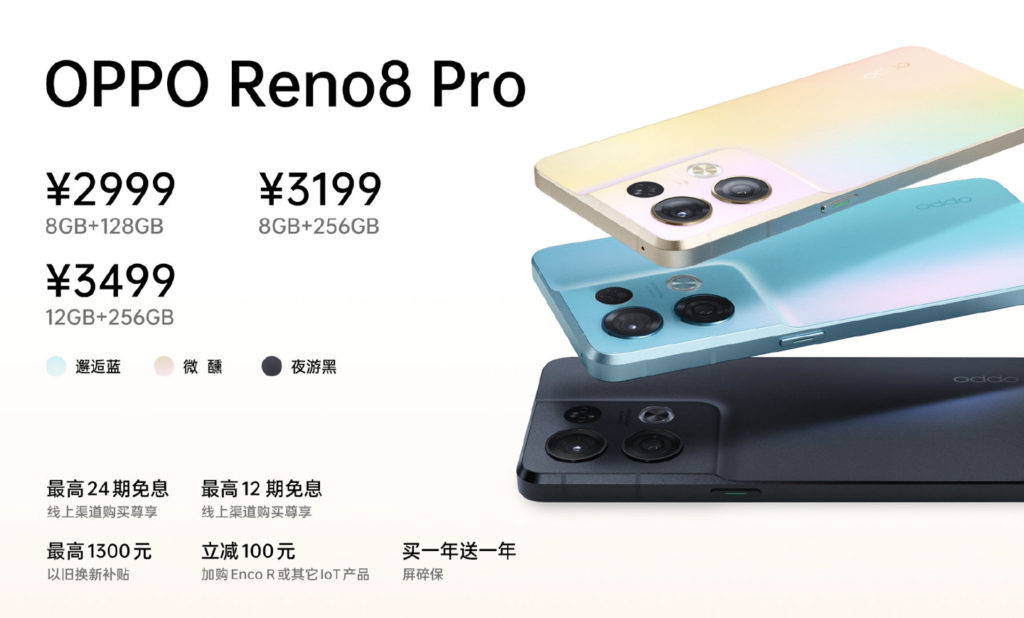 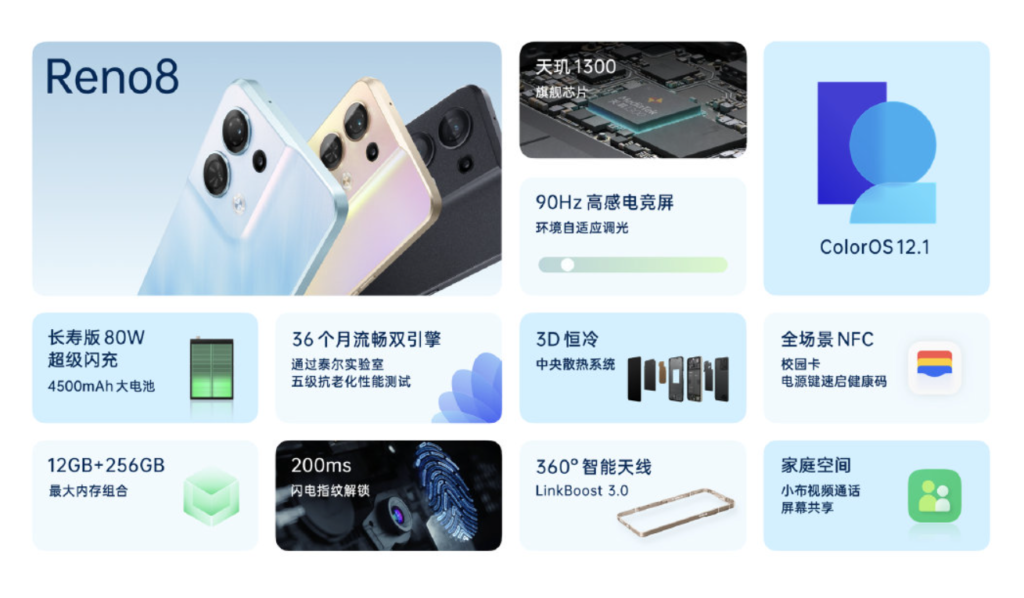 The cheapest model in the Reno8 series is the OPPO Reno8. The device will be available in three color options. These are Slightly Drunk, Clear Sky Blue, and Night Tour Black. It has a thickness of 7.67mm and a weight of around 179g. The device features the Dimensity 1300 processor, which is built on the 6nm process. It sports a 6.43 inches OLED screen with a resolution of 2400×1080 pixels. It supports a refresh rate of 90Hz refresh rate. The device is also backed by a 4500mAh battery and supports 80W fast charging like the other models. 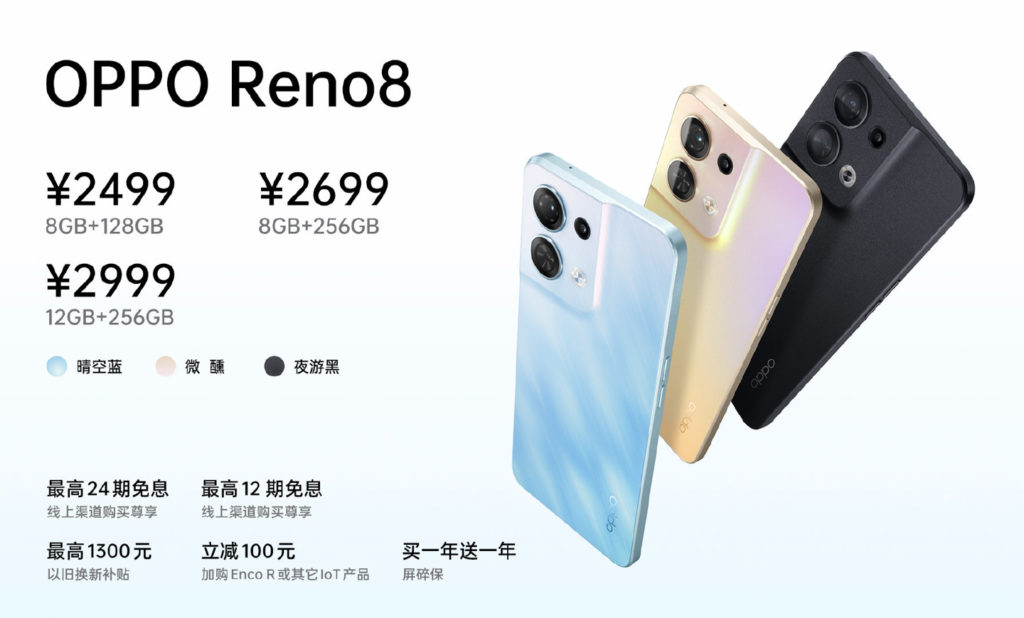