Since the independence of Xiaomi’s POCO brand, the flagship, mid-range, and thousand-yuan markets have been fully covered. Among them, the flagship model is considered to be the POCO F2 Pro, and the mid-range product is the POCO X2. Now, the thousand-yuan new product called the POCO M3 is about to debut. 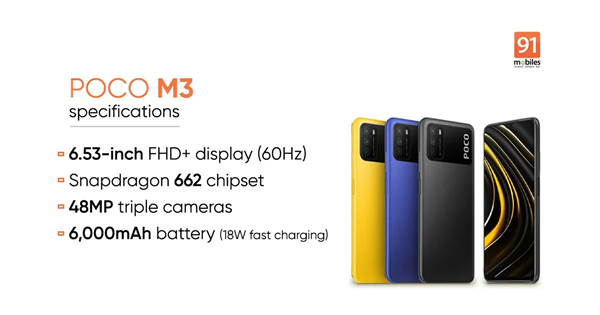 Today, Xiaomi’s POCO official Twitter channel announced that the POCO M3 smartphone will debut in India and is expected to be officially hit the market next month.

The Xiaomi POCO M3 focuses on long battery life. Its battery capacity is 6000mAh and supports 18W fast charging (though it’s difficult to call this feature a fast charging when comparing with the current options on the market). Anyways, due to the large-capacity battery, we can call it a power bank-level smartphone that can satisfy heavy users without stress for a whole day.

Not only that, the design of the Xiaomi POCO M3 is also a major highlight. Its camera area is similar to the OnePlus 8T Cyberpunk 2077 Limited Edition. There are three cameras and the main camera has a 48MP resolution.

In addition, the Xiaomi POCO M3 uses a 6.53-inch full screen with a FHD+ resolution and a LCD material. Under the hood, our protagonist sports a Qualcomm Snapdragon 662 processor, which is suplmeneted by a 4GB memory. The rear triple-camera consist of the 48MP + 2MP + 2MP lenses combination, while the front-facing camera has an 8MP resolution. This handset also supports dual-band WiFi.

In fact, this handset has been announced in late 2020. But now, it lands in India. So it should showcase better sales performance.