Poco has always been maintaining its headlines for better or worse. The company is presently active on social media speculating its own device and hyping its products in the process. One such individual from POCO Global, Angus Kai Ho Ng, who is also their product manager and global spokesperson, has leaked the Poco X3 on Twitter through a tweet. Luckily, it doesn’t look like a rebranded device this time.

As per his tweet, the Poco X3 will be powered by Qualcomm’s Snapdragon 732, which isn’t announced yet. It will be an upgrade to the Snapdragon 730G. It will also have a 5160mAh battery which will support 33W fast charging.

The phone is likely to feature a 6.7-inch display with a 120Hz refresh rate. The display is also likely to have a 240Hz touch response rate. We can expect an LCD panel with a centered punch hole for its front-facing camera. A side-mounted fingerprint is also confirmed. Expect 3.5MM headphone jack as well as Type-C port for charging and data transfer.

At the back, the phone will house a quad-camera setup in an unusual way. Though renders are not always dependable, if it’s from Poco’s marketing manager, we can surely expect the camera module to be similar in the final build. The cameras will have a 64MP primary camera but information about the other three cameras is not disclosed. Whereas, the front-facing camera will house a 20MP camera. 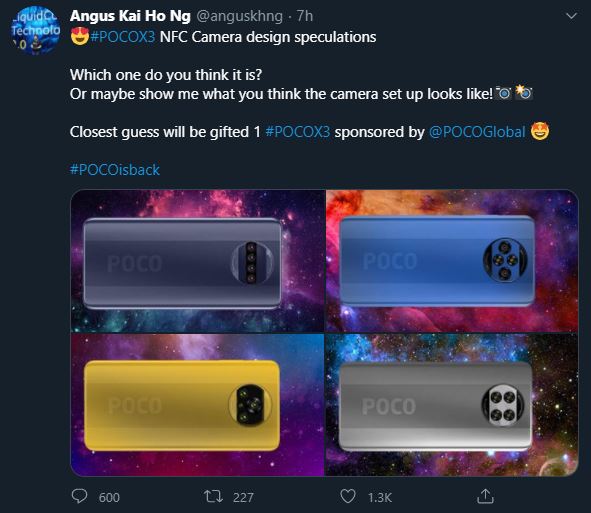 The Poco X3 is expected in two color variants – Blue and Dark Gray. The leak also shed some light over its launch date i.e. on the 8th of September this year, which is like two weeks away.