A lot of Realme smartphones are becoming available in the upcoming few months.  Precisely, the Realme X3 series is coming to India on July 25 with some other accessories like Realme Buds Q. The company started teasing the new devices on its social media platforms, but most of the specifications are not yet officially confirmed. Surprisingly, a device with Model number RMX2085 appeared on GeekBench unveiling some new information. 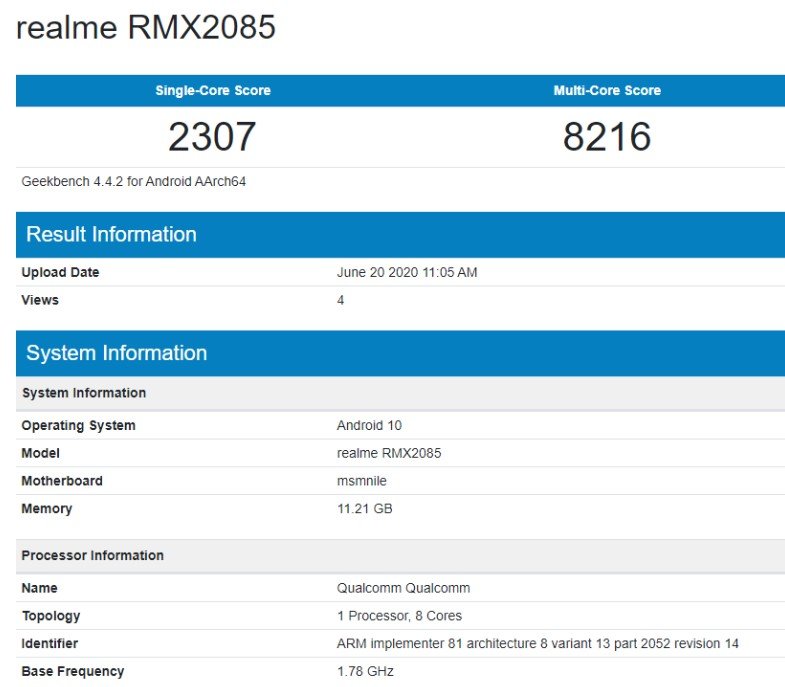 RMX2085 is speculated to be some Realme X3 variant as the model number is similar to Realme Super Zoom (RMX2086). According to the Geekbench listing of RMX2085, the smartphone features 12GB RAM and runs on Qualcomm Octa-Core processor with a base frequency of 1.78GHz. It is based on Android 10 OS.

On the other hand, Realme C11 with model number RMX2185 has appeared on BIS certification. It could make debut along with the Realme X3 as an entry-level smartphone in India. Moreover, it will be the first device using MTK Helio G35 chipset as confirmed in a teaser by the company on Realme Malaysia Facebook handle.

According to a recent appearance on CQC (China Quality Center), it with come up with a 5000 mAh battery and a 10W charger. the smartphone also appeared on NBTC, TKDN, SIRIM, and EEC in Europe.

It appears Realme is a mood to conquer the market in India by providing smartphones, wearables, smart TVs, and other accessories. The new launches will further expand the company’s wardrobe within the country.

Stay connected with us for more!

Related: Realme RMX2121 appears on TENAA and MIIT in China