Recently, Realme released its V series first smartphone with a large battery and many other useful features. Its selling points are the 5G support and 5000mAh battery. But the Realme V5 is not a regular mid-ranger and there will be more customers looking for a better device. However, all OPPO and/or Realme fans don’t have to wait for such a handset for a long time. A new smartphone with a code name of Realme RMX2170 appeared on TKDN Taiwanese certification website. Plus, it has been given the stamp of approval by TUV Rheinland. The code name doesn’t tell anything. But most likely, we are dealing with the Realme X3 Pro.

From these two websites, we learn that the alleged Realme Z3 Pro was tested with the 65W fast charger for safety (it outputs 6.5A at 10V). Our protagonist will come with a dual-cell battery with a 2,200mAh rated capacity per cell (so 4,400mAh total). 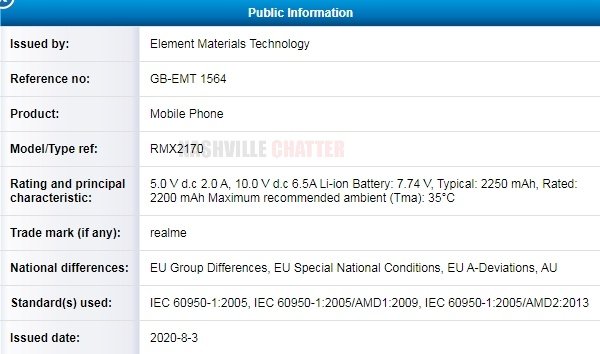 Prior to this, the RMX2170 appeared on GeekBench and was recently certified by the Wi-Fi Alliance. That time, we learned that it will come with the Android 10 operating system and will support Wi-Fi 5 (ac). By the way, the Snapdragon 865 phones support Wi-Fi 6 (ax). So, unfortunately, it won’t be powered by this chip.

But if this information is accurate, there will be a change in Realme’s strategy. We mean the current Realme X3 models use a Snapdragon 855+ and support Wi-Fi 5. But we should also point out that’s not a guarantee, however, as the company’s S765G-based models also lack Wi-Fi 6 (even though the chipset supports it).