Realme X50 5G smartphone has finally surfaced in Europe featuring the specs of recently announced X50m model. The smartphone houses powerful specification long with a splendid design. It is available in two colour options of Jungle Green and Ice Silver. It is available in a single 6GB + 128G storage variant for €350 which roughly translates to $394. 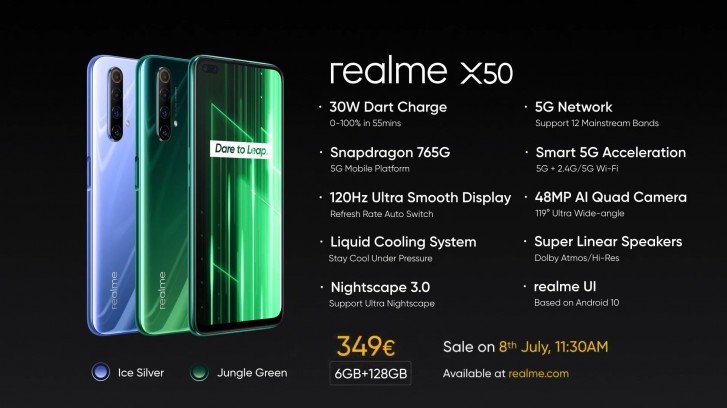 Realme X50 5G carries a 6.57-inch display with 120Hz Ultra Smooth display for the enhanced gaming experience. Its display sports 1080 x 2400 pixels resolution along with 20:8 aspect ratio. The smartphone is powered with Snapdragon 765G chipset coupled with an Octa-core processor and Adreno 620 GPU. The 5G enabled smartphone features some improvement over the Realme 6.

It is faring among the most affordable 5G smartphones in Europe. The smartphone houses a 4200 mAh battery with 30W Dart Charge. It can charge 0% to 70% within 30 minutes and a full charge takes 50 minutes. Other features include support for Super Linear Dolby Speakers and runs on Android 10.

The smartphone will be available from the Realme official website for €350.