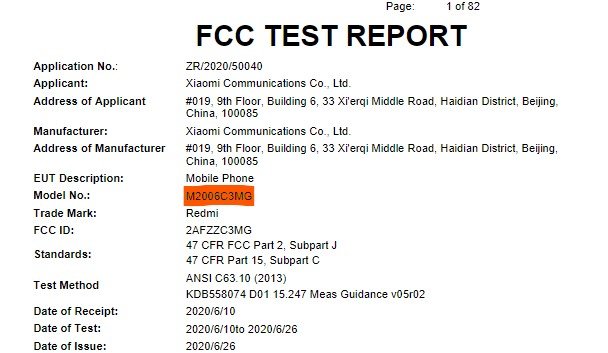 Redmi M2006C3MG appears to be an entry-level smartphone which is rumoured to be the Remdi 9A Pro or some device from Redmi 10X series. However, nothing is confirmed as of now, but we expect it to launch in the coming few months.

The same device appeared on EEC along with two other models M2006C3MNG and M2006C3LG.

Details about its hardware and design are not available, which makes it quite hard to speculate more about the device.

Additionally, Redmi recently announced Redmi 9A and 9C in China with MediaTek G25 SoC and MediaTek G35 SoC, respectively. Both the devices house a 6.53-inch LCD display with HD+ resolution. The Redmi 9A packs a single 13-megapixel rear camera, while the Redi 9C houses a triple camera module featuring a 13-megapixel, 5-megapixel ultrawide lens, and a 2-megapixel depth sensor.

We have to wait and watch for some more details, before speculating anything about the device. Until then, Stay connected with us!