Recently, a new Samsung phone passed the WiFi Alliance certification. The model is SM-F415F/DS. Although the exact model is unknown, the model number indicates that this is a Galaxy foldable smartphone. For reference, the model of the first-generation Galaxy Fold is F900, and the model of Z Flip is F700. (Samsung’s folding screen smartphone models start with SM-F). The newly certified SM-F415F/DS model is considered a cheap version of Fold because it will enter the F400 series. The phone may be called the Galaxy Fold Lite. 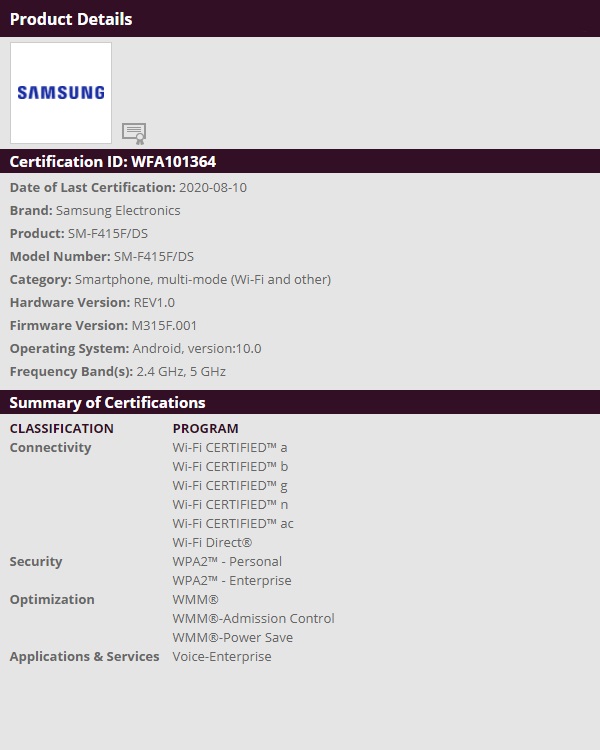 Compared with the Galaxy Z Fold 2 model F91, the ‘1’ in the model number indicates the second generation model. Also, the model number of the new Z Flip 5G is F70x. This means it is not the first-generation product to be relabeled. However, the WiFi Alliance certification indicates that the device does not support WiFi 6. Probably because the Galaxy Fold Lite will use non-flagship chips.

As the previous reports from SamMobile said, this cheap version of Samsung’s folding screen phone supports dual SIM cards. And it should provide 64GB and 128GB storage specifications. We also know it will come in blue, black, and emerald colors. By the way, this phone was initially planned to be part of the August 5 event, but Samsung has apparently postponed its launch to 2021.