As the lockdown is easing off in India, Samsung is gearing up for the launch of its new entry-level phones. The phones are Samsung Galaxy M01 and M11, its important to tell you that Samsung M-series is popular for entry-level affordable phones. The launch date was teased on the Samsung India twitter handle.

#MeraStyleChhayega? Well, zaroor chhayega. Only 3 days left for the stunning #GalaxyM11 and its Triple Camera to launch. Hold on tight! #Samsung pic.twitter.com/LS712L7epP

According to the previous leaks and rumors, Galaxy M01 is powered by a Qualcomm Snapdragon 436 Soc. It features a 5.7inches HD+ display with a water-drop notch. The phone is packed with a dual-camera setup at the back that includes 13 MP wide camera + 2 MP depth sensors. Although the information about the front camera is still unknown. Galaxy M01 has a fingerprint sensor and also has a microSD card slot to expand the storage. It is backed up by the 4000 mAh battery. 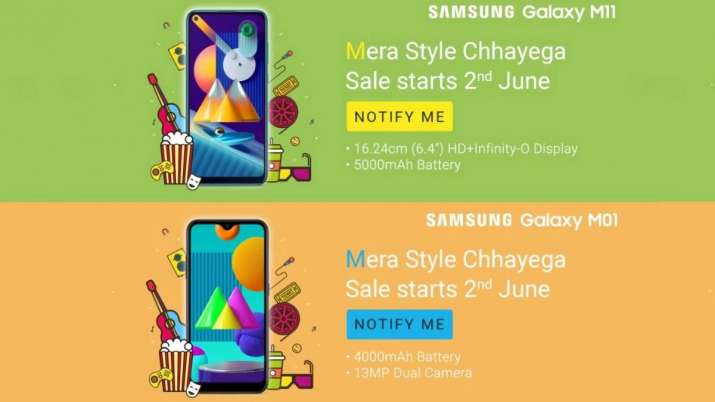 Now talking about Galaxy M11, it features a 6.4-inch HD+ LCD display with the punch-hole camera at the top-left corner of the display. It is packed with triple-camera at the back with 13 MP primary camera + 5 MP ultra-wide + 2 MP depth sensor. On the front side, there is an 8MP camera for selfies and video chats. As I already told you that Galaxy M11 has 5000 mAh battery with 15W fast charging.