There were rumors last month that Samsung is planning to use an under-screen camera (UDC) for the first time on the Galaxy Z Fold 3. (As you should know, the Galaxy S21 phones will miss this feature.) Now, a copy from Korean ETNews confirms this assumption.

According to reports, an industry insider said that Samsung Display has developed a screen that supports UDC. The gap between the pixels becomes wider to allow light to pass through. Even so, because the light is refracted by the OLED display layer, it needs a special algorithm to correct the image. The camera module will come from Samsung LSI.

Only the area above the camera lens has a wide gap, because this will affect the image quality of the display. The picture below is a macro shot of the ZTE Axon 20 screen, the world’s first under-screen camera phone. This under-screen camera also uses a similar method. 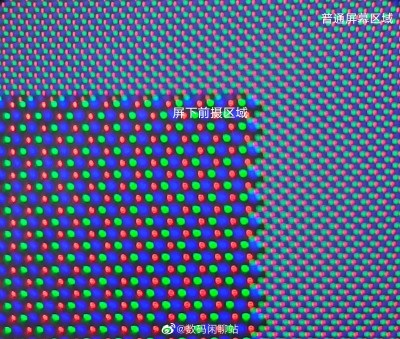 The Samsung Galaxy Z Fold 3 is expected to be unveiled in the third quarter of 2021, and the adoption of UDC will help consolidate its new flagship position (Galaxy Note series is being merged).

Prior to this, we have seen a few patents that show very interesting design of the Samsung Galaxy Z Fold 3. In one patent, a LED light is inserted under the translucent cover. These LED lights can combine different colors to achieve visual and decorative effects. We mean these LED lights can be used for new notifications, messages, missed calls, etc. The new Samsung patent states that the company has taken measures in advance to make the S Pen compatible with bendable (foldable) devices. Although Samsung’s Galaxy Z Fold 2 patent last year also emphasized the technology required in the bendable part of the screen, this time the focus is more on the device itself.