Samsung is always leading mobile device panel makers, and this has surprised us that now Samsung is going to use the BOE OLED panels in its upcoming Smartphones. The reports point that Samsung will be using BOE in Galaxy Book S and maybe in one of the Samsung Galaxy S21 series.

It was a surprise to hear that Samsung uses a BOE-sourced TFT LCD in its new Galaxy Book S, rather than a panel from its own company as the company is leading panels/display makers in the world. It seems that now Samsung likes to use tap BOE to supply some OLED panels for some of their upcoming Smartphones.

The news came from the Korean market research firm DSCC. They mentioned that Samsung might use the BOE panel on at least one of the upcoming Samsung Galaxy smartphone series, i.e., Samsung Galaxy S21.

Currently, Samsung is negotiating with BOE to buy the 6.67-inch display. It is expected that the screen would be flexible and curved.

BOE was founded in 1993, which surpassed LG a few years back, and now it is the leading brand in manufacturing the LCD TV screens. Some of the reports are that they have invested in three lines in China for OLED display manufacturing.

Also, BOE displays are used in smartphones like Huawei Mate 20 and Huawei Mate X. The reports are that the company will exceed its limits to make the displays to 48,000 pieces per month.

Foreign media reports that Samsung may also loose the contract with Apple of making the displays for their smartphones. As Apple also might let BOE supply screens for their new launching Apple iPhone 12. 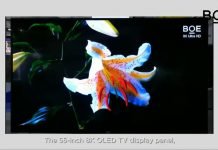