Expectations from the upcoming Huawei smartphone 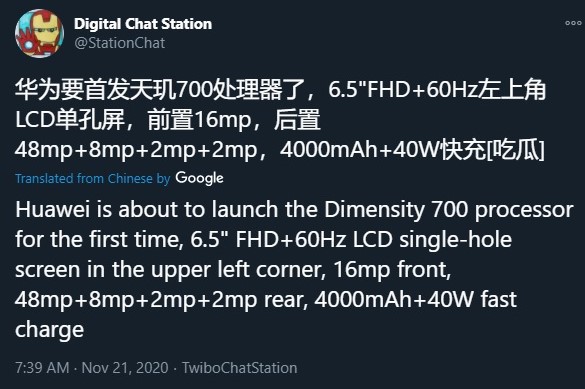 According to the post by Digital Chat Station, the device will be powered by the MediaTek Dimensity 700U SoC which is based on a 7nm architecture. The chipset adopts an octa-core CPU architecture, including two large-core Arm Cortex-A76, with a main frequency of 2.2GHz. Generally, it comes with a 2 x 2.2GHz A76 + 6 x 2.0GHz A55. Also, it integrates the Mali-G57MC2 950MHz GPU.

Moving towards the front, the smartphones houses a 6.5″ FHD+ LCD display. It will support a 60Hz refresh rate along with a punch-hole at its top-left corner. Being an LCD display, expect a side-mounted fingerprint scanner.

For optics, the device will be equipped with a quad-camera setup at the back which will include a 48MP primary camera, an 8MP ultra-wide camera, a 2MP depth sensor, and a 2MP macro lens. Whereas at the front, it will house a 16MP selfie shooter.

Lastly, it will draw its power from a 4000mAh battery which supports a whopping 40W fast charger. Additional features such as dual-frequency GPS, Bluetooth 5.1, and Wi-Fi 802.11ac, dual SIM support, Type-C port can be expected from the smartphone.

The only thing missing from the leak was the product name, color variants, RAM+Storage variants, and pricing. Considering that the device will support a 40W fast charger and 48MP cameras, this will most likely fall under the upper midrange segment. Also, Huawei will like to miss out on Google goodies and instead include their own apps. The leak also didn’t mention the OS it might come with.

Also read: Honor HJC-AN00 / TN00 surfaced on TENAA; might turn out to be the first phone after separating from Huawei