On the last day of summer, US Borders and Custom Protection issued a statement. It said that it had seized around 2,000 counterfeit Apple AirPods sent to New York’s JFK Airport from Hong Kong. The Manufacturer’s Suggested Retail Price (MSRP) was $398,000. But what’s more interesting, the product that is claimed to be as counterfeit AirPods is actually the OnePlus Buds. Also, the total shipment is worth about $158,000. 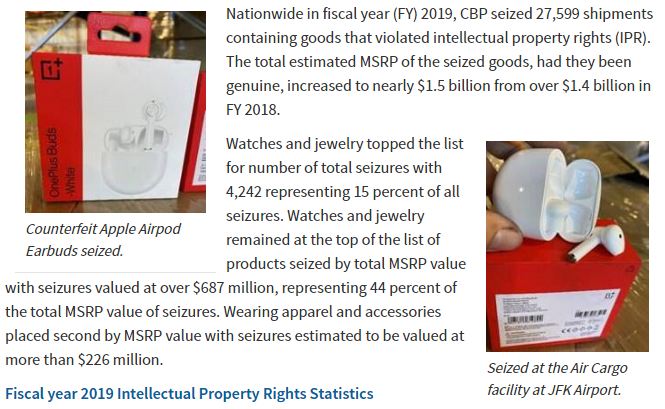 Interestingly, the photo of the product and its retail box clearly shows that we are dealing with the OnePlus Buds. So it’s still unclear how the US Borders and Custom Protection could mess it up.

Troy Miller, Director of CBP’s New York Field Operations, said in a press release: ‘The interception of these counterfeit earbuds is a direct reflection of the vigilance and commitment to mission success by our CBP Officers daily.’

However, the US Borders and Custom Protection should understand that the form factor of the Apple AirPods are very popular and it is used by many manufacturers. And the OnePlus Buds are among those products. But the latter has clear branding. So we still don’t understand how they could confuse them as a knock-off of Apple AirPods.

As for the OnePlus Buds, they feature a 13.4mm dynamic driver and have support for Dolby Atmos for the OnePlus 7 and OnePlus 8 series. But, these headphones also support Dirac Audio Tuner for the newly released OnePlus Nord smartphone.

As a high-end TWS product, the OnePlus Buds has supports environmental noise cancellation. Of course, it is waterproof with an IPX4 rating. Connecting the earphones with OnePlus smartphones enables additional touch controls, as well as a low-latency mode named Fnatic Mode for gaming.