Hello everyone today I am going to talk about the unsolved mystery, Well for you it is and that’s the reason why you are here. Now you might be thinking that I am going to talk about something from Wikipedia, Lets make it clear this thing is completely new to almost every phone user in the world. Yes, this can’t be a co-incidence. So without further due lets expose the secret mystery about iPhone advertisement.

Also Read:
iPhone Users Don’t Know The Hidden Feature On Their Smartphone
This Guy Put His iPhone Within The Chain Of A Dirt-Bike
Ever Realize What Does ‘i’ In The iPhone And Other Apple Products Mean?
This Is The Actual Cost Of Making An iPhone 6 Plus

Now you might have seen some apple advertising videos and just let it end that way. But what if I tell you that there is something which is similar in all of them. Yes, you heard me. There is a thing which is same in all the iPhone advertisements. Watch the picture below and observe it real close.

Okay. So you must be freaking out thinking that. I’m talking some pointless thing here. But no watch this second picture. This is the launch of iPhone 6. 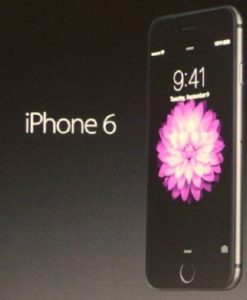 Still thinking that there is nothing in there. Let me reveal it to you. Now watch the time in both the pictures. Exactly same right? But there comes a question “WHY”. Well, everything is for a reason and so this is. Now you might be wondering is that steve jobs birthday? Or did he have any special relation with that time? The thing is was bought on march 2007 when steve decided to reveal mac at 9:41AM.

And then the revolutionary time was fixed for every apple’s future device released. Steve would discuss with this teammates about the launch and then set’s the time for 41 minutes to take a moment and reveal the device.

Since then the teammates and engineer’s also decided to walk on steve’s steps doing the exact same thing. Now you’ve got the idea why every apple’s product is showing the same time in all the advertisements.