Though in the first quarter of 2020, the whole world was suffering of coronavirus, worldwide smartwatch shipments increased. Not surprisingly, Apple still leads the market.

Yesterday, Canalys announced that smartwatch shipments in the first quarter of this year grew by 12% compared to the same period last year, reaching a total of 114.3 million units. 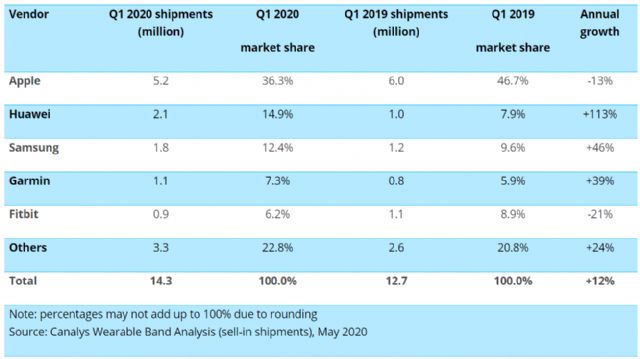 The share of the Apple Watch in the first quarter fell slightly from the 46.7% share in the same period of the previous year. But the WatchOS platform is still the largest and continues to grow.

According to Canalys, WatchOS had 4 million new active users during the quarter, and estimated 70 million people based on the installed base. It is expected that shipments of Apple Watch will reach 100 million units in the next three months.

Huawei has a rapid growth of 113% compared to the same period last year. So the smartwatch shipments more than doubled. But this may not be a significant change. This is because Huawei provided the Huawei Watch GT 2 for free when purchasing some of the P40 series smartphones.

Smartwatch shipments in China increased by 66% in the first quarter of this year. Cynthia Chen, a research analyst at Canalys said, ‘We expect China will be the key smartwatch growth driver in 2020 as a result of its strongly recovered economy and a greater push from local players, including Huawei, Xiaomi and newcomer Oppo.’