Previously, we learned that a mysterious Xiaomi phone code-named “M2101K9C” passed 3C certification. Recently, this smartphone has been certified by the Ministry of Industry and Information Technology. Plus, we can take a look at its photos.

As we can see from the pictures, the back of this Xiaomi phone adopts a rear camera layout very similar to that of the Xiaomi Mi 11. There are three lenses. The front part has a straight screen design, and the hole is close to the Mi 11. Also, we can see that the phone adopts a side fingerprint recognition design. Therefore, it can be inferred that this phone is expected to be the Mi 11 Lite.

When this Xiaomi phone passed the 3C certification with the code-named “K9”, we learned that it will come with 160.53×75.72×6.81mm dimensions. The phone will also support NSA/SA dual-mode 5G, dual-card dual-standby, and carry a 4150mAh battery under the hood. Plus, it will feature a 6.55-inch screen. 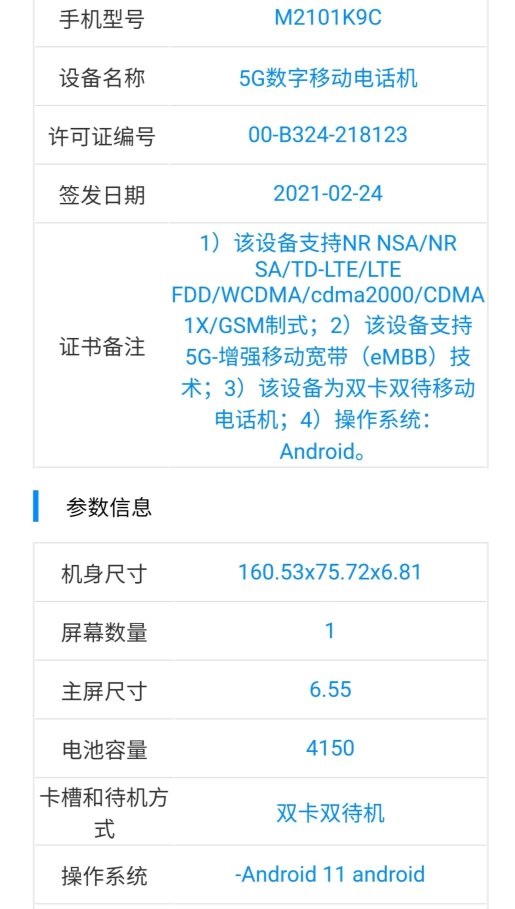 Apart from this, our protagonist has managed to make a few appearances in various videos and photos. One of such photos showcases that the Xiaomi Mi 11 Lite will run the MIUI12 based on Android 11 and sport a processor clocked at 2.3GHz. It is reported that it will come the Qualcomm Snapdragon 775 chip.

Much earlier, it was highlighted in FCC. It was said to come with Snapdragon 732SoC, 6GB RAM and 128GB storage. The phone may also feature a 64-megapixel primary sensor, an 8-megapixel secondary lens and a 5-megapixel sensor.