According to the tweet, the ZTE Axon 30 Pro 5G will come with the Snapdragon 888 chip. Apart from this, the phone will have a quad-camera module on the back and a 4700mah+ battery, which supports ultra-fast charging. According to industry insider Ross Young, the ZTE Axon 30 Pro 5G smartphone screen is supplied by Visionox. Plus, he said that the phone uses a 6.9-inch 120Hz 1080p or 1440p display.

As ZTE has officially introduced, it has adopted core technologies such as ultra-high-transmittance micron-level new materials, independently driven screen display chips, and highly integrated minimalist circuit design to avoid the interference of complex circuits on the camera and improve front-facing shooting effect. Plus, all these are combined with the original natural pixel arrangement, making the display more natural.

ZTE once stated that the Axon 30 Pro has the strongest imaging system in the industry in 2021. In addition, with the blessing of Snapdragon 888, it will at least have better results than the first-generation. Moreover, today, we learned that this imaging system costs 200 million yuan ($30 million). Well, initially the information came in this way. But later we learned that this is the number of pixels. Thus, it refers to the maximum supported pixels of a single image sensor. On Weibo, Lu Qianhao emphasized the highest performance index of the new Spectra 580 ISP of the Snapdragon 888. 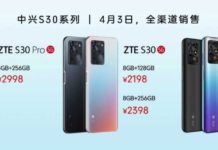